Time for U.S. to legalize drugs? 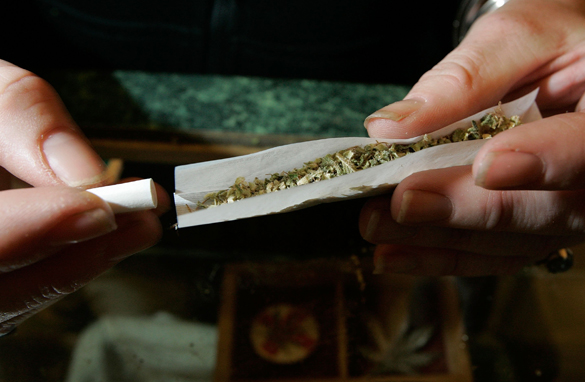 As drugs and related violence from Mexico continue to infect 230 cities in the United States, some politicians, economists, and even drug law enforcement leaders say legalizing drugs may be the answer.

One Texas city councilman tells CNN "it's the least worst option to ending cartel violence." He says decriminalizing drugs would take away a lot of the financial incentive for the cartels to kill. Arizona's Attorney General says 60 percent of the battle is marijuana - and he's called for "at least a rational discussion" on ways to take the profit out of weed.

Some insist legalizing drugs like pot would help our economy. One California congresswoman says it would pump $1 billion into her state's budget alone every year. A senior economics lecturer at Harvard says federal, state and local governments spend $44 billion a year to enforce drug prohibition. If drugs were legal, they could be making about $33 billion per year in tax revenue.

Jeffrey Miron describes how prohibition creates violence because it drives the drug market underground. He says the same was true with alcohol; and is also the case for illegal gambling or prostitution. He says prohibition of drugs also corrupts politicians and law enforcement, which is why bribery, threats and kidnapping are common for industries that are prohibited; but rare in other cases.

But critics say the consequences of legalizing drugs would far outweigh the benefits. Some focus on the moral and health related concerns about drug use. One former special agent for the federal Drug Enforcement Administration told CNN "No way. We would lose a generation." Some wonder if drug use itself can cause violent behavior; and others aren't sure if decriminalization would make much of a difference in the Mexican drug war. However, the country has managed to survive the repeal of Prohibition almost 80 years ago.

Here’s my question to you: Is it time for the U.S. to legalize drugs?

Kevin from the Netherlands writes:
Let American politicians ask us here in the Netherlands how we are successfully dealing with the drug problem. Most of the junkies here are foreigners who are not free to smoke weed in their countries. Check the crime statistics in America and the Netherlands, then I’ll leave the answer to you.

C. from Tampa, Florida writes:
We seem to be running out of ideas on how to make money. Legalizing and taxing the hell out of some softer drugs like marijuana could bring us considerable amounts of money.

Danny from Williamsburg, Kentucky writes:
Absolutely not. You don't legalize murder or rape because they keep happening, nor should you legalize drugs. Drugs put us all in danger, not just from the violence that surrounds them, but because of their adverse effects on society. Do not trade one evil for another.

Jacob writes:
Only somebody who's high could think that fighting this "war" has been effective. I don't do drugs, and I don't support doing so, but we've got to realize that everything isn't in our control. For now, we're only burning dollars.

Mark from Columbus, Ohio writes:
Jack, It seems like more and more people are calling for this rational discussion, so why is Obama laughing off the question like it’s some sort of joke? There have been many studies showing broad potential savings from a legal Cannibus plant and also broad potential earnings, including from taxes, industrial, textile, and biofuel resources. Maybe if Obama would sit down and "relax" for a few minutes, someone could explain to him some of the benefits that aren't necessarily recreational.

Dean from Modesto, California writes:
You are on the right track, Jack. We have to keep in mind that the "demonization" of drugs came from the federal government’s "easy" solution to something that they didn't want to bother on figuring out how to tax.