South Carolina's Republican Governor has become the nation's first to reject some of the economic stimulus money. Mark Sanford says he'll turn down about $700 million of his state's $2.8 billion share unless Washington lets him use it pay down the debt. 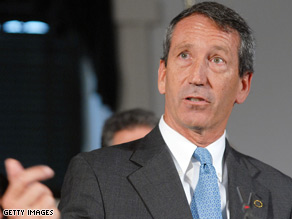 Gov. Mark Sanford, a potential 2012 GOP candidate, is one of several Republican governors who have criticized the $787 billion stimulus plan.

He insists taking the money would harm his state's residents in the long run by increasing the federal budget deficit and building expectations for government programs that can't be sustained.

Funny but it seems like the folks in South Carolina are hurting pretty bad right now. The state has the second highest unemployment rate in the country - having shed many jobs in manufacturing, tourism, construction and retail. Its unemployment rate is at 10.4 percent, second only to Michigan.

Sanford is one of several Republican governors who have criticized the $787 billion stimulus plan. However other governors from both parties have said they would take any money that these states rejected.

And in the end, Sanford's move is largely symbolic. That's because state legislatures can override governors and take the money. South Carolina congressman James Clyburn, a Democrat, is blasting Sanford for rejecting the money that could help residents of their state.

Clyburn says Sanford quote "will sleep well at night because he has improved his 'conservative record' and raised his national profile." Probably worth a mention that Sanford is seen as a potential GOP presidential candidate in 2012.

With all the warm, fuzzy sympathy he's displaying for the hard-pressed people of South Carolina, I wonder how he was ever elected governor.

JC writes:
That he's more concerned with proving that the Republicans are right than he is with helping the people of his state.

Michael from South Carolina writes:
Jack, I live in South Carolina, and the unemployment rate is one of the highest in the country. We also have the poorest and outdated schools in the U.S… Governor Sanford would rather watch the poor people and his state suffer just to pursue his political aspirations.

Stacy from Leesburg, Virginia writes:
Congratulations, Governor Sanford. You strut around like an ideological rooster in a broken farm and proclaim that your party is more important than your people. South Carolina is rife with poverty and poor education consumes your youth while unemployment continues to rise. Your brain is writing dogmatic checks your real world tush will pay for come election time.