What will end President Obama's honeymoon?

More than 50 days into the Obama administration and it looks like his honeymoon with the American people is not over just yet.

A CNN poll of polls shows 61 percent of those surveyed approve of the job President Obama is doing. This isn't as high as it was during the transition period or right after the inauguration, but it's still significant.

This rating is also slightly higher than those of his predecessors - George W. Bush, Bill Clinton, George H.W. Bush and Ronald Reagan - at around the same time.

President Obama is maintaining this approval rating as he gets down to the business of governing; following through on many campaign promises and making some tough decisions on everything from Iraq to Afghanistan to Guantanamo Bay detainees, education and health care.

Here’s my question to you: What will it take to end President Obama's honeymoon?

END_OF_DOCUMENT_TOKEN_TO_BE_REPLACED

What if U.S. loses superpower status? 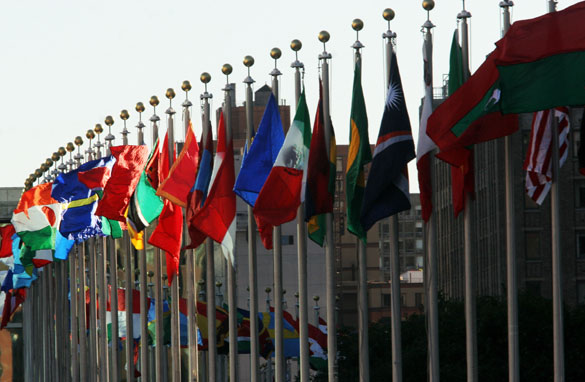 America's recession could mean the end of its role as a superpower - according to a piece in "The Atlantic" magazine.

Robert Kaplan writes how politicians have pretty much taken for granted that since Pearl Harbor Americans would cooperate with military missions and costs. For almost seven decades, the home front has been willing to write blank checks for our efforts abroad - building ships, planes, and tanks so the U.S. could assert itself overseas.

Kaplan suggests this tradition might come to the end; transforming the U.S. into a "shrinking superpower." He writes how the public turned against the Iraq war back in 2006; and how the Obama administration probably has about a year to improve things in Afghanistan before the public turns on that effort too.

And there's more - how about the expensive weapons programs and air and sea platforms around the world? These are what make the U.S. a global dominant power and a critical diplomatic voice. These things also cost a fortune.

Kaplan doesn't see a sudden slashing of defense budgets by the Obama administration. Rather a "gradual siphoning" of money away from the Defense department and the military over the next decade. Meanwhile, China, India and other nations are growing their forces. Kaplan writes that he doesn't think it will mean a security crisis for the U.S., but instead a multi-polar world.

And in the end, the worst economic crisis to hit us since the Great Depression could mean that Americans turn more inward and focus on the homeland.

Here’s my question to you: What will it mean if America loses its superpower status?

END_OF_DOCUMENT_TOKEN_TO_BE_REPLACED

Merit pay for teachers a good idea even if pres. takes on supporters?

You've got to hand it to President Obama - it seems like he's following through with many of his campaign promises, even if it means taking on traditional Democratic voting blocs. 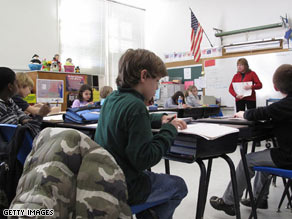 President Obama says good teachers should get raises and bad ones should be removed.

The president is out criticizing public schools and vowing to change them - in part, by rewarding good teachers and replacing bad ones - something that doesn't usually sit well with teachers' unions and public school systems. The president says good teachers will get pay raises if students succeed and will be asked to take on more responsibility. However, bad ones should be removed. The president stated, "I reject a system that rewards failure and protects a person from its consequences."

The president of the American Federation of Teachers embraced the goals outlined by the president, but said as with any public policy, "the devil is in the details" and it's important for teachers' voices to be heard in this process.

This comes at a time when public education is set to receive about $100 billion from the economic stimulus package; and the president is making a point to link a stronger educational system to future success for our sagging economy.

The president's willingness to go against a traditional Democratic constituency like this is refreshing; and it's not the first time. Mr. Obama recently irked many Democrats with his plan to keep between 35,000 and 50,000 residual troops in Iraq after the draw down.

Here’s my question to you: Is merit pay for teachers a good idea even if it means the president is taking on one of his biggest groups of supporters?

END_OF_DOCUMENT_TOKEN_TO_BE_REPLACED

My battle with alcoholism

Here is an excerpt from Jack's new book, "Now or Never"

For years, the most complex and stressful situation Carol Cafferty had to cope with was my drinking problem. When I'd get up in the morning, I immediately wondered, What kind of mood is she in and how soon can I start drinking today? How do I get all the booze I want, and get myself half or three quarters f**ked up without winding up in divorce court?

On weekends I wanted to get to drinking right away. I knew that she would be watching to see how early I'd go to the fridge and reach for that first beer. If we got up on Saturday and Carol went out someplace to, say, get her hair done, that was my green light to have a few extra ones. If I held off till three or four in the afternoon, we had a much better day, but I was suffering.

This is where she proved how tough she was, stronger than any man I have ever known. I still don't know how the hell she did it. I'd have told me to go f**k myself long before I quit drinking. I had her walking on eggshells, just as my parents had done to me. Now it was Carol who had to constantly be on guard, wondering what mood I was going to be in, how much I'd been drinking, how it would impact the emotional tenor in the home with the girls around. I knew this was hard on her and worried her to death, but like all addicts who have earned their Ph.D's in denial, I figured, I can finesse all this s**t and keep an even keel, addictions and all. But no one finesses it indefinitely unless the spouse/partner becomes an enabling doormat and says, "Okay, I'll pretend this isn't happening or I'll excuse it this one last time."

That wasn't Carol's style, and our marriage was seriously tested and threatened. We didn't have a lot of knock-down, drag-out fights, but we had our share of loud, explosive arguments. Ugly things were said and threats made - I'm getting a divorce, I'm going to do this or do that. Sometimes, to be sure, Carol could overlook what I threatened and ignore me. Other times she was provoked beyond her limits and fired back, and we got into shouting matches.