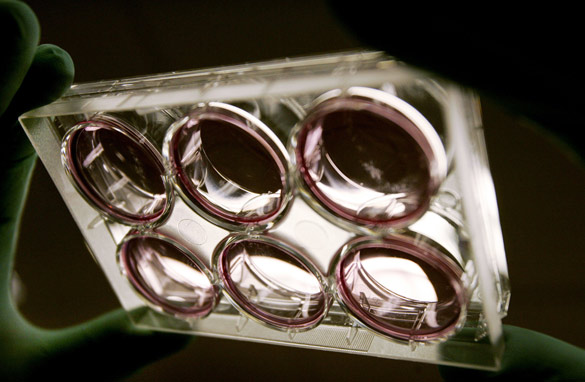 Some Republicans are calling President Barack Obama's reversal on embryonic stem-cell research a distraction from the economic slump.

Congressman Eric Cantor, the Republican whip, says the economy is "job number one. Let's focus on what needs to be done." Former House Speaker Newt Gingrich tells the Washington Post that the president's move is an "ideological sideshow" that's taking the focus off the worsening economy. Gingrich says that it's "dangerous" for the administration to "pick a wide series of fights."

But, the White House says that funding embryonic stem cell research is part of the administration's plan to jolt the economy; with scientific and technological advances furthering the overall goals of creating jobs. It was also a campaign promise President Obama made.

He signed the executive order today repealing a Bush-era policy that limited tax dollars for embryonic stem cell research. Many hope that science will eventually help find cures for everything from Parkinson's disease to diabetes, cancer and spinal cord injuries. Also, President Obama's move is part of a larger effort to separate science and politics - a line many believe was blurred under President Bush.

In addition to calling the move a distraction, other Republicans - like House Minority Leader John Boehner - say the president has rolled back important protections for innocent life and further divided the country. Much like the economic stimulus package, the stem cell debate is a way for Republicans to try and shore up their conservative base. Yet with approval ratings for the GOP at their lowest level ever - lotsa luck!

Here’s my question to you: Some Republicans say President Obama's stem cell reversal is a distraction from the economy. Are they right?

James from Chuckey, Tennessee writes:
The stem cell reversal is a distraction only for people who believe that religious fundamentalists should be allowed to block scientific research and medical care. It's time to tell our homegrown Taliban that they are no longer relevant.

Dane writes:
I guess the Republicans know a thing or two about distractions. Weren't they the ones that gave us proposed constitutional amendments on gay marriage and flag burning when the rest of the country was trying to focus on the unfathomable speed at which the Iraq war was going down the toilet?

Mike from Glenmoore, Pennsylvania writes:
Jack, I don't think the president is causing a distraction from our economic woes by simply spending a few seconds signing a document to clear the way for scientific research. Rather, it's the Republicans who are trying to use the stem cell story to distract from the fact that their party has no economic solutions and has become a party of extreme right-wing whiners.

David from Alexandria, Virginia writes:
Anything which is not focused like a laser beam on the economy and banking system is a distraction as far as I am concerned. Pretty much everything else can and should wait.

Lisa from Ohio writes:
Jack, I wonder if Newt Gingrich would be calling this an "ideological sideshow" if his child or grandchild was paralyzed from a spinal cord injury? If any of the Republican critics lived my life for a week, they may think differently. This can be a priority, along with the economy. There are people and their families who are desperate for a cure for many debilitating conditions. They deserve a chance for hope.

Chuck from Warren, Ohio writes:
Jack, Look at the stocks of research companies today: up 40%. The Republicans would rather we just die off so we won't keep voting them out of office.

Jack from Nice, California writes:
Jack, Anything said by what’s left of the Republican Party is a distraction from reality.