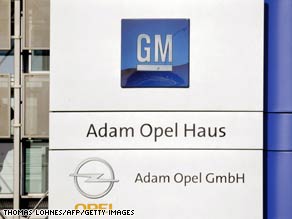 Bryan writes:
It depends on how desperately they want to save those 300,000 jobs. If I were a European and my government was bailing out an American company, I would be pretty upset.

Steve from Texas writes:
So don't help them. Then just drop European production and see how they like the job losses. If those "with" are supposed to help those "without", why shouldn't that apply to everyone? If the countries benefit from employment by GM, then line up to help.

Andy from Dekalb, Illinois writes:
They shouldn't get anything, from Europe or anyone else. What incentive exists for GM, or AIG for that matter, to do anything right when lemon socialism is the rule of the day?

Alex writes:
Of course they should. General Motors has learned that shaking down governments is more profitable than making cars.

Stephen in New York writes:
If Europeans deem it worthwhile to infuse billions of dollars into GM Europe, let them. The U.S. infusion of billions does not seem to have helped much.

Vince from Atlanta writes:
I think the European countries should help themselves to General Motors. Pay GM, and take over the plants. That should help everybody.

Jane from Minnesota writes:
If there are European factories involved, they absolutely should.

Michael in Perris, California writes:
Sure, why should we be the only ones to reward failure?

John writes:
I suspect that pretty soon GM will make their case for bailout to the African wild life population. This scam is going global.