The California woman who had octuplets to go with the six children she already had continues to stir debate around the country. The latest comes from Georgia, where lawmakers want to prevent the same thing from happening in their state.

A Georgia state senator has introduced a bill limiting the number of embryos that can be used during in-vitro fertilization.

A state senator has introduced a bill that would limit the number of embryos that can be implanted in a woman's uterus during in-vitro fertilization. He doesn't want taxpayers to have to end up paying for raising children that result from multiple births if the parents can't afford it.

The limits would be two embryos for a woman under 40 and 3 for a woman older than 40. These numbers are slightly lower than what's considered normal by most doctors. Breaking the law could result in a fine of up to one-thousand dollars.

And it's not just Georgia. Missouri is considering a similar bill and laws just like this are already on the books in England and Italy.

Some fertility doctors suggest the proposed legislation would hurt a woman's chance of getting pregnant, that there are special cases where they need more than 3 embryos.

Critics also suggest this bill is a backdoor effort to ban abortion. That's because the bill says "a living in vitro human embryo is a biological human being who is not the property of any person or entity."

It's not likely to pass in Georgia anytime soon because of a crowded legislative calendar, but the fact that it's being discussed at all is cause for alarm in some circles.

Here’s my question to you: Should the government limit the number of embryos a woman can have implanted?

END_OF_DOCUMENT_TOKEN_TO_BE_REPLACED 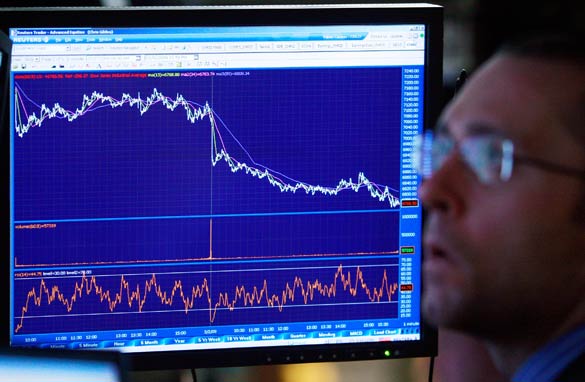 The stock market closed below 7,000 on March 2. The last time that occurred was in May 1997. (PHOTO CREDIT: GETTY IMAGES)

As the stock market continues to drop, President Obama is running out of people to blame, according to an editorial in the Wall Street Journal.

Before the president took office, in early January, the stock market was over 9,000 its highest level since last fall. But in the last two months, it has dropped 25% to its lowest level since 1997. It closed today with a gain of 150 points.

The Journal suggests that Mr. Obama's policies are slowing, if not stopping, what would be a normal economic recovery. "From punishing business to squandering scarce national public resources, Team Obama is creating more uncertainty and less confidence," said the editorial.

The editorial takes issue with the way much of the administration's stimulus spending went to social programs rather than public works, how the Treasury has been managing the bank bailout plan, and how tax cuts were devoted to income maintenance rather than giving incentives to work or invest.

The Journal also points out how the market took a dive after the President announced his budget. The paper called it a "declaration of hostility toward capitalists across the economy."

The editorial suggests Democrats benefit from blaming all bad economic news on President Bush,
and there's a new poll out that shows Americans kind of agree with that. The NBC/Wall Street Journal poll shows 84% of those surveyed say this is an economy Mr. Obama inherited and two-thirds of those people think he has at least a year before he becomes responsible for it.

Here’s my question to you: Should President Obama be blamed for the continuing fall of the stock market?