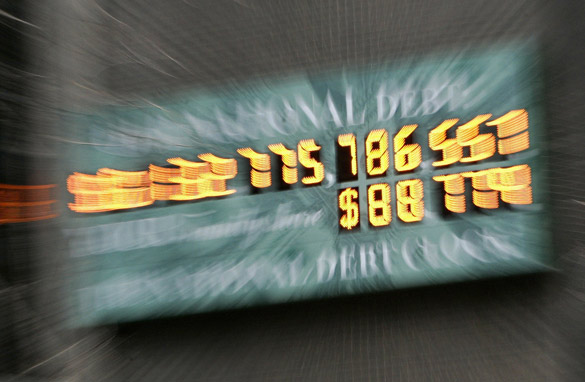 In the Republican response to President Obama's speech last night, Louisiana Governor Bobby Jindal called the stimulus package "irresponsible". He said it will grow government, increase taxes in the future and saddle future generations with debt.

"Who among us would ask our children for a loan, so we could spend money we do not have, on things we do not need? That is precisely what the Democrats in Congress just did," said Jindal.

Interesting, after the last 8 years, it would seem that Republicans are hardly in a position to lecture anyone about fiscal responsibility. When President Bush took office in 2000, the national debt was about $5.7 trillion dollars, which after two wars and lots of other spending, is now approaching $11 trillion. President Bush ran up more debt for this country than all previous presidents combined.

Jindal acknowledged last night that in recent years, "our party got away from its principles." No kidding.

Keep in mind, Jindal - who some see as a possible contender for his party's presidential nominee in 2012 - is one of the Republican governors talking about rejecting stimulus funding for his state. Jindal says he plans to turn down $100 million because it would require his state to change its unemployment laws. I guess when you're a wealthy state like Louisiana you don't need no stinking stimulus money.

Here’s my question to you: Are the Republicans in any position to lecture President Obama on fiscal responsibility?

Janet from Yosemite Gateway, California writes:
Hello, Jack. Eight years of George W. Bush spending like a drunken sailor, and now the GOP wants oversight and financial responsibility? Shame on them. Any lecturing by the GOP should be done in front of a full-length mirror.

Julius in Canada writes:
No, the Republicans are the architects of the current crisis. They let the banking and mortgage firms run amok and now it’s up to Obama to fix it. Maybe the Republicans should go back and look at the last year to see where they failed the American people and go from there. Yes, they need to keep the Democrats in check, but unless they take responsibility for their mishandling of the economy, nobody will take them seriously!

Ray from Danville, Virginia writes:
Someone needs to be fiscally responsible. The Democrats have controlled Congress the last 2 years and the federal debt has increased 2 trillion dollars. Obama has said that deficits don't matter so we see where he stands. I only hope that the Republicans try to hold spending. If not, we are in much worse trouble in the near future than we are now.

Tom in Pennsylvania writes:
Neither party should be throwing stones. However, the Republicans should just bury their heads in the sand for a while and let Obama straighten things out. Republicans = deregulation. That’s what got us into this mess.

Carole writes:
Gov. Jindal said last week that he would refuse the stimulus money that the government had passed into law, on principle… This is a young man who pundits hailed as one of the savior's of the Republican Party. I listened to his "rebuttal" last night and my husband and I haven't laughed so hard for a while. He's a joke.

Michael in Los Angeles, Calif. writes:
Not hardly. Last night, Gov. Jindal was sent on a suicide mission and he knew it. You could see it in his eyes.