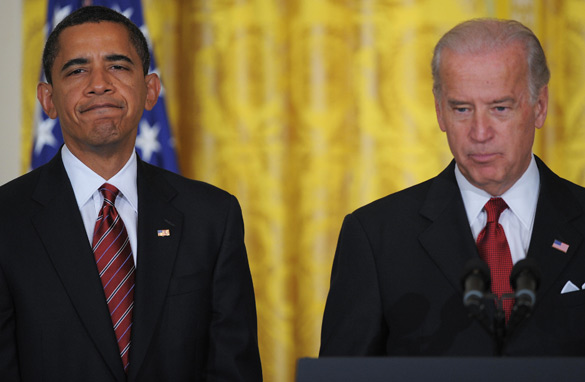 Levon from Redondo Beach, California writes:
V.P. Biden is not at all an embarrassment. The man speaks his mind. You, Jack, of all people, should be able to appreciate that.

Toni in Delaware writes:
An embarrassment? How soon we forget what we were stuck with for the last eight years: one Dick Cheney. Obama should start worrying about Biden when he starts shooting people.

Rod in Allentown, Pennsylvania writes:
Jack, Is this a trick question? Biden is a blithering fool and would be an embarrassment to anyone. The first of a number of miscalculations already by the Great One in the White House.

Tom from Las Vegas writes:
No way! People know Joe as a guy who hops around with his foot in his mouth once in a while, but he is a survivor, a patriot, a humanitarian, and a dedicated public servant, not an embarrassment.

Terry from Chandler, Arizona writes:
There is so much bad news I think Joe is a bit refreshing. His comments bring us a little laughter. Actually I think he should speak out more. Think about it Jack, a little Joe-speak every day would be uplifting.

Stanley writes:
I've got a suggestion, Mr. Cafferty. How about they give him one of those earphones like the ones you and Mr. Blitzer wear when you are on air? I think that would help guide him if someone would be on the other end telling him what to say.

Conor from Chicago writes:
I'll still take him over Palin any day.