War in Afghanistan "much tougher than Iraq"? 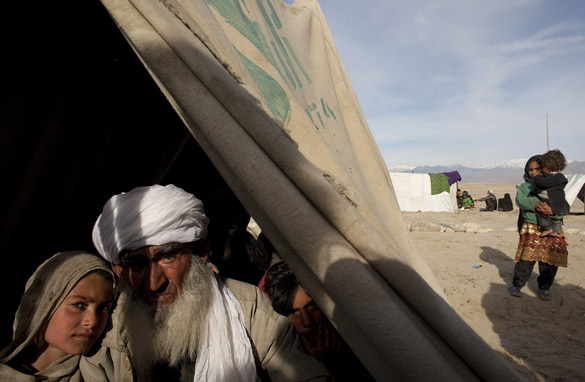 A top diplomat recently said the war in Afghanistan will be a "long, difficult struggle." A US military raid recently destroyed 270 homes and displaced hundreds of families. (PHOTO CREDIT: GETTY IMAGES)

Just in case President Obama doesn't have enough worries at home with the economy, one of his top diplomats is now warning that the war in Afghanistan will be "much tougher than Iraq."

Richard Holbrooke - the special representative to Afghanistan and Pakistan - insists that there's no "magic formula" and that it will be a "long, difficult struggle." Holbrooke knows a thing or two about dealing with conflict, he's got a long resume that includes negotiating an end to the war in Bosnia.

The president has made it clear that Afghanistan will be a top priority and his administration is deciding whether to send another 30,000 troops there, which would almost double the current troop strength.

Speaking at the same meeting as Holbrooke, General David Petraeus said there's been nothing easy about Afghanistan. He described the country's many needs - ranging from ground troops to intelligence, surveillance, special ops, you name it. There are high expectations that Petraeus can mirror the progress he made in Iraq.

The U.S. is also calling on the international community to step up its role in the war-torn nation.

Although Afghan President Hamid Karzai acknowledges security problems - he says they've had success in areas like roads and health care. Mr. Karzai insists his country is not a "narco state" or "failed state." It's probably worth noting that he's up for re-election this summer.

Meanwhile, a new poll of the Afghan people shows support for Mr. Karzai's government, the U.S. and NATO plummeting - so President Obama has his work cut out for him.

Here’s my question to you: What does it mean when one top diplomat says the war in Afghanistan will be "much tougher than Iraq"?

Shirley from Virginia writes:
No question about it, Jack, Afghanistan will be much tougher than Iraq. I believe that if we had kept our eye on the ball and not let the GOP take us off to Iraq, after eight years it would have been much easier for President Obama to go in and finish the job. Given the terrain and the non-cooperative government, we have a fight on our hands but at least it is the right fight.

Bruce from St. Paul, Minnesota writes:
Afghanistan could make Vietnam seem like a rousing success story in comparison. The Russians rumbled into Afghanistan in tanks, and crept out with their tail between their legs. The only real problems will be the terrain, the climate, the culture, the poverty, the drug trade, Pakistan, and the cost. It may be the "right" war, but that doesn't mean it will be easy.

Michelle from Nevada writes:
It is time to pull out of both wars and negotiate diplomatically with the powers that be in the region. There are plenty of people in that area who know far better than we do how to achieve workable solutions. No one ever wins an occupation. Let's bring our citizens home.

James from New Jersey writes:
These same "top diplomats" said only a few short years ago that Iraq was an unwinnable quagmire. I'm not saying Baghdad is as safe as Greenwich Connecticut, but the surge has had success. Let's try it in Afghanistan before we decide to abandon all our goals in the region. We owe the Afghanis that much at least.

Robert writes:
Iraq bent our military; Afghanistan may break it. What should a third- or fourth-tour Iraq-war soldier think when he's sent to a much-different landlocked Muslim country, where supply routes are easily attacked and tribal allegiances count for more than nationalism, and our goal is even more amorphous than the one we went into Iraq with?