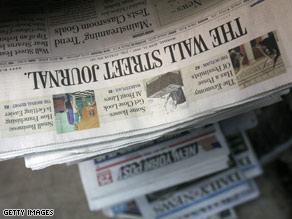 Steve from Florida writes:
That's kind of a tricky question. With the almost instantaneous transfer and availability of information on the internet, a breaking headline is old news before they even turn the press on. Then, of course, that headline becomes a "breaking" story for a week or two on cable news. What I think is important to save is honest, unbiased, in-depth reporting no matter what format. Anybody still doing that?

Jim from Chicago writes:
Essential. There is a huge difference between an informed opinion and just forming an opinion. Newspapers are a critical source of information, particularly about local issues.

Erico writes:
Not too long ago, we used the teletype ticker tape. It was essential for many functions, such as tracking landing and takeoff of aircraft or keeping tabs on the stock market. The teletype is a symbol of what will become of newspapers as we know them now. The electronic media is sweeping across the board, eliminating old technologies and industries. By eliminating my newspaper subscription, I've been able to upgrade my internet services and communications.

David in Orlando writes:
Unfortunately our society is leaving behind many of the values that kept us safe and free. With all due respect to the electronic media of all sorts, it is the quick, easy access to info without sufficient standards of accuracy that have helped to get us into this situation. There was a time when a newspaper article was well-researched and fact-checked and was therefore a dependable source of accurate information… Today, TV news has often had its various faces slathered in egg because of the misguided desire to be first rather than right. And the internet is ten times worse than that. But none of it matters; newspapers as we knew them are dinosaurs.

Maurice from Two Rivers, Wisconsin writes:
Absolutely essential to our freedom. No Bias, no Bull.