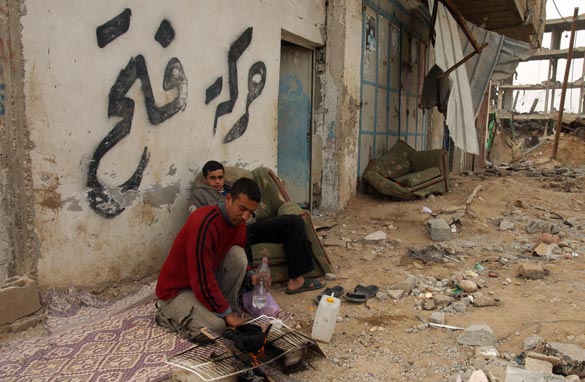 Palestinians prepare tea on an open fire next to Israeli-bombed buildings in Rafah on the Gaza Strip border with Egypt on January 24, 2009. The Arabic graffiti on the wall reads: 'Fatah movement.' (PHOTO CREDIT: PATRICK BAZ/AFP/GETTY IMAGES)

Former President Jimmy Carter tells the Associated Press that Israel will face a catastrophe unless it revives the Middle East peace process and establishes an independent Palestinian state. This is a sentiment he's echoed before, and he's saying it now as he's making the rounds to pitch his new book on the issue. But timing is everything.

President Obama sat down for his first formal TV interview since taking office with the Dubai-based Arab language network Al-Arabiya. It's a calculated move for the President to make good on his promise to improve American-Muslim relations in the wake of the Bush administration. In the interview, he told Muslims that Americans are not the enemy. He also vowed to hunt down terrorist groups who kill innocent civilians while respecting laws.

The interview comes as the President's newly tapped special envoy for Middle East peace, George Mitchell, is on his first trip to the region to meet with Arab leaders.

Perhaps like clock work, the week-long cease-fire between Israel and Gaza, that halted three weeks of fighting, was ended when Palestinians detonated an explosive device at an Israeli Army post, and Israeli helicopters fired back in response.

END_OF_DOCUMENT_TOKEN_TO_BE_REPLACED

How would you rate Pres. Obama’s first week?

It's been one week since Barack Obama became our 44th president, and a busy week it's been–signing executive orders, meeting with his teams of advisers on the economy, national security, Iraq and the Middle East. He's also been meeting with lawmakers from both parties trying to win support for his emergency stimulus package. 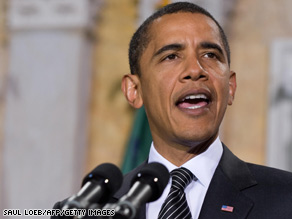 How's he doing so far?

In addition to getting his feet wet, the new President is learning some things along the way.

For example, the White House press room is where the press is, and if you don't want the press to ask you questions, don't go there.

If you're going to ban lobbyists from working for you, you have to ban the one that used to lobby for Raytheon from working in your Defense Department as well.

If you're going to close Guantanamo, you have to have a plan for what to do with the inmates there. A couple of them have turned up in recent al Qaeda videos.

You can't overturn President Bush's executive order banning abortion funding for charitable groups overseas without incurring the wrath of right-to-lifers in this country.

And picking a fight with the corpulent Oxycontin aficionado of right wing talk radio, Rush Limbaugh, will mobilize a bunch more on the conservative right and begin to down your approval ratings.

But the new President seems to be weathering the storm quite well. The latest Gallup Poll, taken over the weekend, gives him a 69% job approval rating.

Here’s my question to you: How would you rate President Obama's first week in office?