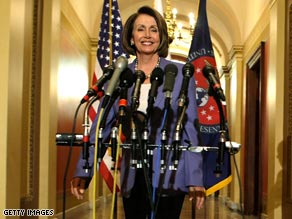 Mari from Salt Lake City, Utah writes:
Having birth control either covered by Medicaid or by one's health insurance will save our nation millions if not billions! But it’s not enough to hand out birth control pills, etc. We need to educate women, especially the poor, undereducated women in our cities and rural areas. If poor women would use birth control responsibly we would cut the cost of welfare moms and, for the Pro-Life folks, cut the number of abortions. Pelosi is right!

Pete from New York writes:
Ah yes, the values of a rich white San Franciscan. Perhaps Nancy was looking across to Oakland and its poor people and she became uneasy. I hate to say it but this could fall into the category of racist comments if we could get her to describe the kind of person who is going to receive these condoms. What would the reaction be if someone in the GOP said we needed to stop the poor from breeding so that we can save money? This is a Democratic leader and not some flakey back bencher! What an embarrassment to the country.

Don from Ottawa, Canada writes:
She's right Jack! If we had enough sense to plan our families we wouldn't have so many mouths to feed, jobs to fill or kids to educate. It's these same "no to birth control" crusaders that are the first to criticize poor welfare families.

HD from Phoenix, AZ writes:
You must be joking? With all the hard challenges this country is facing, this is the best she can come up with to help stimulate the economy. The People's Socialist Republic of California needs to put a muzzle on that woman.

Melanie from Iowa writes:
She knows what she’s talking about. As many of us remember during the barrage of Presidential commercials, many people with financial woes give up medicine first. Helping provide birth control is a cost saver to the government in the long run.

Mary from California writes:
Pelosi needs to mind her own business and stay out of Americans personal lives! Not only is it pork, but it is socialism.