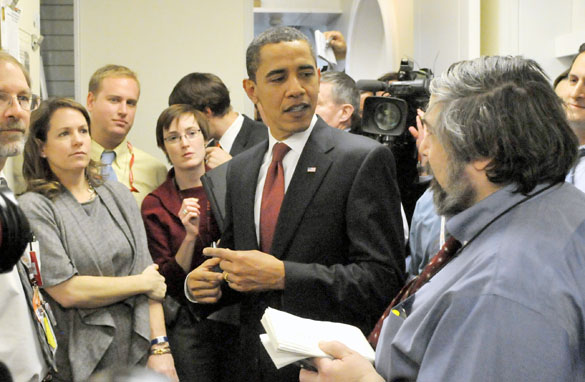 Joe from Delaware writes:
The question was fair. Talk is cheap. He needs to walk the walk.

Liz frpm Towson, Maryland writes:
It wasn't unfair, but it was inappropriate for the reporter to push Obama for a response. It’s one thing to ask a question, but it's another to be rude to the President. Obama is also correct that there's a time and a place for pressing for answers, and a time and a place for cordial greeting.

Kevin from Chester Springs, Pennsylvania writes:
Give the guy a break already. He went down to say "Hi", shake hands and try to set the stage for a new kind of presidency. I am quite frankly tired of this new paparazzi attitude of shoving questions in his face just like cameras. He's the President of the United States for goodness sake. Show some respect.

Jim from North Carolina writes:
Why not? Sunlight, transparency, accountability, etc. His rules.

Rick from Davis, California writes:
It's never unfair to ask the president a substantive question. It is sort of silly to expect a substantive answer in an informal setting.

Jay from Brownwood, Texas writes:
No, it wasn't unfair. It is clear that President Obama just wanted his visit to be a publicity shot showing he will be accessible to the press and the American people. But what good is accessibility if he is unwilling to answer the important questions that we want answers to?

Jim from El Paso, Texas writes:
Sure it was Jack but what do you expect from press people? They have no sense. You are not included in that bunch.