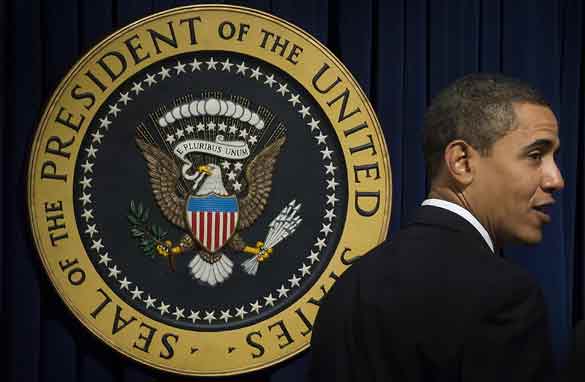 Frank from Connellsville, Pennsylvania writes:
He will face his biggest challenge from his own party. The Democrats have been the "loyal opposition" for so long it only knows what it is against and not what it is for. The leadership change our country needs is not yet complete. We need to see a new chapter of congressional leadership elected to move us forward.

Daniel from Indiana writes:
Congress. That is where the most difficulty will come from. We have a Congress that is used to fighting just to fight. I have little faith in Harry Reid or Nancy Pelosi pushing bi-partisanship. I do believe that they will continue to push division, as will the Republicans.

M.A.C. writes:
Looks as if one area of difficulty may be the press corps. Why were they whining so much about the fact that even though they received pictures and audio on the oath re-do they weren't given a complete video? Much ado over nothing, in my opinion.

Earl from Florida writes:
The unemployment situation is without a doubt the most important and difficult task at hand. Creating jobs is paramount. Gainfully employed homeowners will take pressure off home foreclosures while simultaneously stimulating the economy. The world's problems can wait until we get our financial house in order.

Keietta writes:
His problem will unfortunately begin in his own back yard with individuals who want to continue dividing the lines between parties. It has already begun with the "Republicans" holding up the confirmation of the Presidents nominee for Attorney General.

Arthur writes:
President Obama will inevitably have to deal with the fact that, as he says, the economy will get worse before it gets better. People tend to have a selective memory, especially when it comes to their wallets, and when this economic crisis deepens he'll have to answer for its cause.