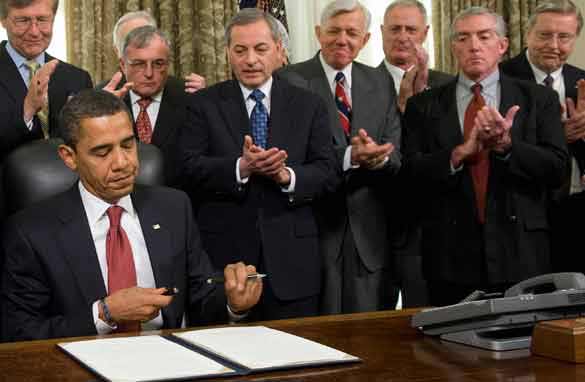 Jim from California writes:
President Barack Hussein Obama won't change anything. It will be business as usual. He has most of the Clinton administration back in power. He was using the term change just to get elected. He has been close personal friends with thugs before being elected and now we have more like Geithner who should be charged with tax evasion.

Raoul from New Orleans, Louisiana writes:
President Obama will be the first one to tell you, he does very little on his own. One of the reasons he went from near obscurity to win the nomination and the presidency was his management style and who he chose to surround himself with. He is inclusive and not afraid to listen to other points of view. The changes will be much easier with this frame of mind.

Asim writes:
You need to watch a bit more CNN Jack. He already has.

Linda from Bisbee, Arizona writes:
I doubt it very much.

Nancy from Tennessee writes:
Nancy Pelosi did say that the Congress will not adjourn for the President's Day holiday until they get the stimulus package signed into law. Thank goodness for this carrot to dangle over their heads to help speed up the process. This seems like politics as usual. Congress always wants something in return for doing the right thing.

Kim from Dublin, Ohio writes:
Why not? The Republicans certainly did.