Global Warming: Where does it rank as a concern?

No pressure, but as President, Barack Obama has just four years to save the planet. That's the dire warning from NASA scientist Jim Hansen, who says it's urgent for the new President to take the lead and do something about climate change. 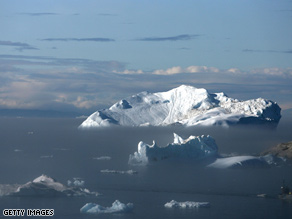 Scientists believe that Greenland, with its melting ice caps and disappearing glaciers, is an accurate thermometer of global warming.

Hansen says in four years it will be too late. The consequences of doing nothing will include rising oceans, collapsing ice sheets, flooding, dying species, and disrupted weather patterns.

Carbon levels have already sent greenhouse warming past the point of no return and efforts to stop them from rising aren't working. Clearly a new approach is needed.

Hansen is urging the Obama administration to order an investigation of the ice caps around the world as the first order of business for the climate office. He's been asking the British Royal Society and the National Academy of Sciences to do so but it hasn't happened yet.

He makes it clear that the only way global warming can be solved is if the United States takes a leadership role. Without the U.S. aggressively pursuing solutions, Hansen says we are doomed.

Here’s my question to you: Where does global warming rank on the list of things that concern you?

John from Alabama writes:
It ranks extremely high if it is true. Governments and media have made a real mess out of the publics’ ability to discern what is true and what is false. I will act as though there is true global warming occurring, because this decision leads to conservation of resources. But I don't have any idea if it is in fact happening. Do you? Really?

Ed from Rhode Island writes:
Jack: Climate change has been my number one issue for years. It's extremely unfortunate that the outgoing president and industry pals spent millions in propaganda campaigns to debate our leading scientists’ arguments, and create a "gray area" of doubt for our citizens. The world is aware and involved, but not the majority of Americans. The wars and global economy pale in comparison to the consequences of Global Warming.

Don from Fort Gratiot, Michigan writes:
Come on Jack. Give us 24 more hours to enjoy this historic event before we start prioritizing our many big issues. I don't think it's asking too much and I think the problems will be there for us on Wednesday.

Meg from Troy, Ohio writes:
Jack: It certainly has to rank behind the economy and our wars in the Middle East. I think that it is important because of our energy situation. It will need to get its share of attention in the next four years.

Albert from New York, New York writes:
Tied for first with everything else.

Ed writes:
It's snowing today and has been cold all week. Global warming is high on my list but will settle for local warming.