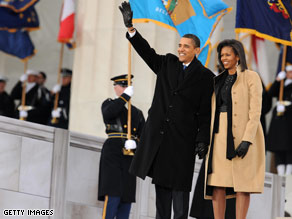 Claudia writes:
An extravagant inauguration sends a message around the world that we may be down but don't count us out.

Dawn from Sellersville, Pennsylvania writes:
Extravagant yes, but well worth the effort. This is a glorious event I never thought would come to pass. As a black woman, I've noticed since the morning after the election there has been a subtle change in our society. People actually speak to each other. I can't tell you how many people make a point to have eye contact and say good morning or good afternoon. The message that is being sent is a new beginning for our great country. The world is envious and I am proud.

Gigi writes:
It makes me sad with our government and economy in such a mess. With American children going to bed hungry and cold it does seem outrageous to me. This weekend we compiled food boxes for our poor. It reminded me of France when the Royalty dared to dance, eat and sing. And Queen Marie was told the people had no bread and she "said then let them eat cake".

John from Fort Collins, Colorado writes:
Barack Obama's grand and elaborate inauguration festivities are a positive way to capture public attention and set the stage for the implementation of his new agenda for the country. I feel it is fitting to have a brief holiday from all the dire news, economic and otherwise, to enjoy the festivities and celebrate this moment in history. It is money well spent. Early on Wednesday morning the hard work will begin.

Karl from San Francisco, California writes:
After 8 years of the Bush administration, it isn’t an extravagant inauguration, its intense mental health therapy for a few days and we need it.