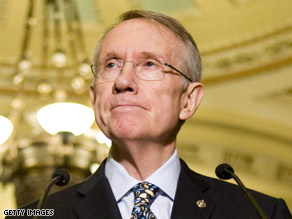 Jack from Washington, DC writes:
Jack, Harry Reid is really getting out of control. For the past couple years Pelosi and Reid have been headlining the Democratic agenda in Congress and it seems as if they are having a hard time coming to terms that there is a new sheriff in town. Reid more so than Pelosi.

Barb from New Port Richey, Florida writes:
No I don't think so. He seems to dance to his own drummer, and from what I see he has about as much rhythm as GW. Not a pretty picture!

Judy writes:
Somebody needs to put duct tape over this guy’s mouth. Me thinks Harry Reid doesn't like change too much. I hope Harry gets used to it soon, because he works for the voters, and the voters said Obama is the commander-in-chief. Enough said.

John writes:
He's a probably right that he doesn't work for Obama. But that's not his problem. He thinks he's self-employed and answerable to no one and that's all of our problem.

Billy from Las Vegas, Nevada writes:
"Hands Up Harry" Reid is an embarrassment to my state and the Democratic party. Talks tough but then flip-flops all the time with the latest being the Roland Burris situation. He's the senate point man for future President Obama's programs so he better change his attitude real quick or we will end up with yet another "do nothing" Congress while the American people suffer. btw, Jack, most Democrats I know here in Nevada can't stand the guy.

June from New York:
The better question is, "Does Harry Reid work?" Every time he opens his mouth he proves himself to be an idiot. The man is a joke and needs to pack it in.

Edith in Coral Gables, Florida:
Do you work for Wolf Blitzer, Jack?