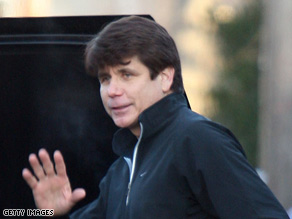 Robert writes:
Of course not! He's on tape. His own words ought to be enough cause to have the Illinois State Police to bar him from the Governors office.

Paul from Columbia, South Carolina writes:
There is no "swift" in justice anywhere in America anymore. The longer it lasts the more money the lawyers make. The victims no longer count.

Ron from San Francisco, California writes:
I'm sitting on a jury now and let me put it this way. You don't go slow for any reason other than to make sure you did it right. Before destroying a man, make certain, beyond any doubt, that you're doing the right thing. If I were in the Assembly, I would want to go slow for my own conscience. Imagine if you impeach him and then U.S. Attorney Patrick Fitzgerald later fails to prove his case?

Tony in Michigan writes:
Not really, but this is how these things are done. Look at how long the Scooter Libby thing took or how the U.S. Senate did nothing after Stevens was convicted. Right or wrong this is what we get for tolerating scandals and corruption on the whole from elected officials. They should suspend his power to fill the vacant Senate seat until the investigation is complete, immediately.

Gary from El Centro, California writes:
I think they did the right thing in giving him a little time to decide whether or not to resign. He's not moving, so now it's time to kick it into high gear and get him out of there.

Kevin from Chester Springs, Pennsylvania writes:
Is he still Governor? Yes? Well then it's not quick enough.

Tom from Boston, Massachusetts writes:
Illinois would be moving faster if they didn't have such a hard time just pronouncing his name.