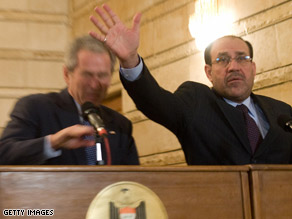 Gus from San Francisco, California writes:
It looks bad, but there is a silver lining. I don't think that this journalist would still be alive if he had thrown his shoes at an American President or Dignitary standing next to Saddam Hussein. I guess that is progress.

Al from California writes:
It means Bush has no soul, and someone decided to loan him theirs.

JS from Grenada, West Indies writes:
The last thing I want to see happen is that George Bush leaves office with a chorus of sympathy from protocol buffs like myself. I want to condemn the shoe throwing incident. The reporter squandered a good opportunity to register his objection to Bush's presence and the last eight years by doing what journalists do best - ask cutting edge questions.

Wayne writes:
President Bush was just being greeted as a liberator.

Beverley from Fredericksburg, Virginia writes:
Jack, The journalist who threw the shoe stated that it was for the widows and the people who have been killed - I've never heard the President talk about them. I have no doubts that Sadaam was a ruthless dictator and he killed his own citizens - but he never killed as many as Bush and the neo-cons in the pursuit of liberating Iraq.

Tommy in Texas writes:
If the reporter's feelings are representative of most Iraqis', and I think they are, it is time to get our troops home.

Ed in Savannah, Georgia writes:
Jack, As they say, "A picture is worth a thousand words" - or in this case, 500 pairs of shoes. I have a hunch that reporter did what a lot of Iraqis would like to do. What I'd like to know is - can we get that reporter into the White House Press corps? Press conferences might then get the TV ratings of, say, American Idol!