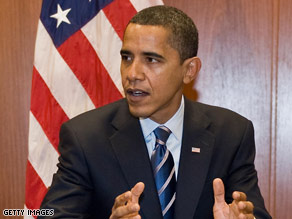 Ray from Nashville, Tennessee writes:
In almost every recent election, the winner has moved away from his base and to the center of the electorate to win. Obama did the same. The liberals saw it then and now they want to act disappointed? When will the fringe elements of both parties realize that this country is a centrist country and is no longer dominated by conservatives and will not be dominated by liberals?

Dan from Bluefield, West Virginia writes:
If Obama turns out to be a closet Republican like Clinton was, we Democratic voters will vote out so many Democrats in the 2010 election that Obama will feel like he's been neutered. He can become the first eunuch President of he forgets his base.

Robert from New York, New York writes:
I am a liberal Democrat and am absolutely thrilled at Obama's pragmatism and desire to bring this country together. When you elect an adult to the Presidency don't be surprised that he acts like an adult. May I remind my fellow liberals who are complaining that I am really tired of losing elections and that we elected Barack Obama, not Dennis Kucinich.

Michael from Baltimore, Maryland writes:
If liberals were looking at Barack Obama through the rose colored glasses of his rhetoric, then it's understandable that they would be disappointed. Obama is a master of the art of ambiguity and many people read into his statements what they wished to hear. Now that he's named a cabinet largely full of Clintonites, it's harder to project the sorts of policies that progressives hold dear onto his presidency.

Bert from Philadelphia, Pennsylvania writes:
The folks on the far right live in a la-la land of god, guns and libertarian values. The folks on the far left live in a la-la land of populist equality, the good of human nature & socialist values. What neither of them understand is that over 90% of America is neither idealistic nor demagogues - we're pragmatists who just want to make a fair living, enjoy our lives and make a better place for our children.