Good idea for D.C. bars to stay open all night during inauguration? 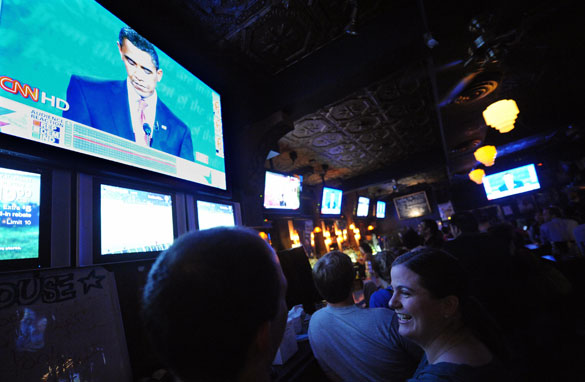 President-elect Barack Obama's inauguration is going to be a huge celebration bringing millions of people to Washington D.C. to party.

In order to literally keep the party going all night long, the city council passed emergency legislation this week allowing bars, night clubs and restaurants to stay open around the clock from January 17th until January 21st.

People could disagree about whether this is a real good idea. Yesterday, the leader of the Washington D.C. police union told the Washington Post he's worried that police resources could be insufficient during Inauguration weekend because of extended hours for clubs, bars and restaurants.

He said the officers in the seven precincts that serve the district will be spread thin and the amount of manpower needed for these extended bar hours is unknown. What is known, or can be reasonably assumed, is that if between three and five million people descend on Washington for the inauguration and the bars are open around the clock there could be problems.

Here’s my question to you: Is it a good idea to keep the bars in Washington D.C. open 24 hours a day for four days during inauguration week?

END_OF_DOCUMENT_TOKEN_TO_BE_REPLACED

[cnn-photo-caption image= http://i2.cdn.turner.com/cnn/2008/images/12/05/art.obama2.gi.jpg caption=" The President-Elect insists there's only one President at a time."]

President-Elect Barack Obama isn't even in office yet and already members of his own party are whining. You'd think after the last eight years they would be so happy to have him on his way to the oval office that they would keep their mouths shut, but no.

Some Democrats, including House Financial Services Committee Chairman Barney Frank of Massachusetts, are complaining that they want a more assertive Barack Obama.

The President-Elect insists there's only one President at a time, although some say his numerous press conferences and public image suggest he's more presidential than the president.

Doesn't matter, members of his own party say he's not being aggressive enough when it comes to critical economic issues facing the country like the potential collapse of the auto industry and the mortgage meltdown.

President-Elect Obama called for an extension of unemployment benefits, which passed and has talked about a stimulus package before he takes office. He has also said he wants to help the auto industry. But apparently that's not enough for the whiners.

Here’s my question to you: Is President-Elect Obama being assertive enough when it comes to issues like the auto industry and the financial crisis?

END_OF_DOCUMENT_TOKEN_TO_BE_REPLACED

Israel is apparently considering a strike on Iran's nuclear facilities without our help.

The Jerusalem Post reports Israel is drawing up options to attack Iran WITHOUT coordination with the U.S.

Coordination would be helpful because the U.S. controls Iraqi airspace and the U.S. Air Force could give the codes to the Israeli Air Force.

A top official with the Israeli Defense Ministry told the newspaper that while it's better to coordinate an attack, they are considering options that do not include our help.

Various news reports have said President Bush has refused to give Israel the green light.

But that won't necessarily stop an attack.

Officials in Teheran are reportedly skeptical that Israel will strike.

There's apparently still some time left to decide on making a move...Israeli officials say while Iran is making progress, they don't expect them to have enough enriched uranium for a nuclear bomb until the end of next year.

Here’s my question to you: Should Israel attack Iran's nuclear facilities without coordination with the United States?