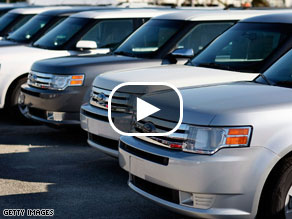 Auto sales have hit new lows. Since November of last year, GM is down 41%, Ford is down 31%. It's not just the American automakers who are suffering. Toyota sales are down 34% and Honda is down 32%.

This news comes as the Big 3 make another plea to Congress tomorrow for a $34 billion dollar bailout.

Ford, which is asking for $9 billion, seems to be "getting it." Yesterday, the company said it would sell five of their corporate jets and cut its CEO's salary to $1.

House Speaker Nancy Pelosi says auto industry bankruptcy is not an option, and if the cash doesn't come from a new loan, the industry will get money from the $700 billion dollars already approved to rescue banks. I must have missed the part where they put Nancy Pelosi in charge of all this.

A CNN/Opinion Research Poll out today finds a majority of Americans, 61%, oppose a bailout of the auto industry and 70% say it's just not fair to taxpayers. They also don't think it will help the economy.

Here’s my question to you: When it comes to the auto industry, what's the right answer?

Pinky writes:
American taxpayers should not bail out the auto companies. The union and top management knew this was going on for years. The ride is over for them and I'm in no mood to pay for their bad judgment and greed. I, too, wonder when Nancy Pelosi was put in charge of the bailout. She should go and sit in her seat.

Dave writes:
How is it fair to me to bailout AIG, and the other financial institutions that made stupid, greedy loans to half-wits that thought they deserved a $300,000 house on a $30,000 annual salary? The auto workers are being hit by a credit crunch not of their own making. GM, Ford and Chrysler are asking for a loan, America. Don't treat them as the whipping boy for your frustration.

Glenn writes:
GM had something like 75% of the market roughly 30 years ago. Today they have about a third of that amount. GM, Chrysler and Ford have all been stupid for decades. Honda, Toyota and others have seized the momentum, built quality cars that people want, and Detroit continues to churn out junk. Let them go through bankruptcy court. Let some other company buy up their factories, and start anew. They screwed up. Just desserts.

Kathy writes:
Jack, I really don't see why we should bail them out. The way the economy is right now, most normal people would have to be crazy to try to borrow money to buy a new car. So if they get the bailout to stay in business, who is going to buy their product?

Jim writes:
If it hits the fan, can AIG or any of the 'faux' money industries build a tank or military cargo truck? I didn't think so. Let's bail out the companies that are part of the defense of this country.

Jann writes:
The answer is a resounding "No Bailout"! What would happen if all 3 disappeared? We'd have Honda, Toyota, Subaru, Kia, and not a single Hummer. Now this is what I call change!