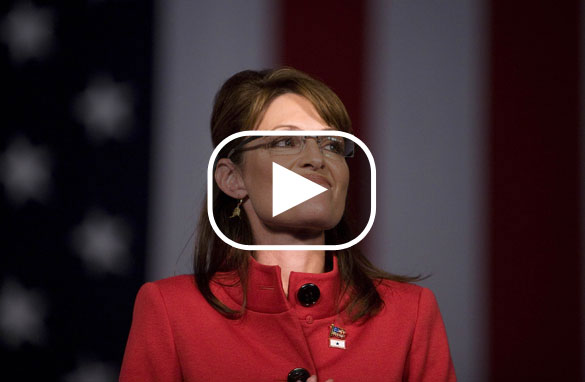 It may feel like a long ways away, but Republicans are already looking ahead to the 2012 presidential election.

According to a new Gallup Poll, Republicans and Republican-leaning Independents most would like to see Sarah Palin run for president in 2012. That's right…Sarah "I read all the newspapers," Palin. Former mayor of Wasilla, first-term governor of Alaska and hockey mom. Her interviews with Katie Couric are the stuff of legend. After she and McCain got their clocks cleaned, Governor Palin couldn't get enough of the TV cameras. They were in her kitchen, her office, virtually every corner of her life. She is now reportedly being wooed to write a book-that would be interesting-or maybe do a TV show.

Other possibilities like Rudy Giuliani, Newt Gingrich, Bobby Jindal and Charlie Crist didn't even get the support of half the Republicans polled.

Here’s my question to you: What are the Republicans’ chances in 2012 if Sarah Palin is their first choice for president?

Gina from Racine, Wisconsin writes:
Even the Republicans are not dumb enough to elect a President that can't even get through a complete sentence, again. This woman massacres the English Language and her "folksy" way of talking sounds borderline trailer trash. I can't see her carrying on an intelligent conversation with another world leader.

Mike from Syracuse, New York writes:
Jack, it doesn't matter. If the economy is fixed and humming along in four years, no one will beat Obama. If it's not, no one could lose to Obama, since Obama will be the new Bush.

Alexis writes:
Jack, her chances are good. She has a special need child, I have a special need child. She has a son fighting overseas, I have a son overseas. She's a hockey mom, I'm a soccer mom. True blue American, but more importantly she's a governor and qualified. Why don't you do a poll on who has a better personality Cafferty or Palin? That's more interesting than this squabble.

Carol from Pittsburgh, Pennsylvania writes:
Zippity-do-dah. Wow! Is she the best the Republicans think they've got? Palin will run as the anti-MENSA candidate.

Mike writes:
As George Carlin said, “Imagine how stupid the average person is, and half the people are stupider than that.”

Anne from Chicago, Illinois writes:
Did I hear you say Palin is writing a book? How is that possible when I've yet to hear her complete a proper sentence? Shouldn't she try reading one first?

Michael writes:
My answer to your question: Excellent. But my question is: What are Cafferty's chances of being on CNN in 2012? My answer: None.