Should Obama hold off raising taxes on wealthy? 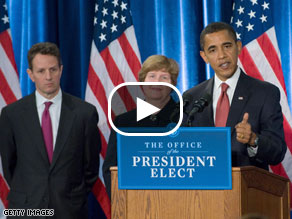 There are stimulus packages and there are stimulus packages. Remember the one President Bush, House Speaker Pelosi and Senate Majority Leader Reid collaborated on a while back? It was $168 billion and resulted in a few hundred dollars in most people's pockets. It did it's job, gave a short term jolt to the economy, but it's effects are long since gone. And the economy is a whole lot worse now than it was then.

Stand by for "Stimulus Two!" Congressional Democrats say they will have a stimulus package ready for Barack Obama to sign the day he is inaugurated. New York Senator Chuck Schumer told ABC's "This Week," this time the stimulus package could total $700 billion. Gee, another $700 billion. And that's a pretty round number in Washington these days. After all, $700 billion you may remember is what Congress committed last month to bailout troubled financial institutions. It's also an amount slightly higher than what the nation has spent on the war in Iraq over the last 6 years. But it doesn't matter, does it? It's money we don't have anyway, just add it to the national debt.

David Axelrod, Obama's chief political adviser, said Sunday that the cost of Obama's economic rescue plan would be pricey. He also hinted that the president-elect may hold off on raising taxes for the wealthy and instead just allow the Bush tax cuts to expire in 2010. Despite Obama's campaign promise to immediately roll back the Bush tax cuts for people making more than $250,000, conventional wisdom says it's never a good idea to raise taxes during an economic slowdown.

Here’s my question to you: Should President-Elect Obama hold off raising taxes on the wealthy for two years?

Victor from Venice, Florida writes:
No. One of the best things that Obama could do right away is to take steps to reduce the obscene income gap between the rich and the rest of us. The "fat cats" had it way too good for the last eight years. Let them share in the sacrifice. We need to get our economy back in shape.

R.W. writes:
He should not do anything with taxes probably within the first year. The economy is so unstable, that if he were to raise taxes within a certain tax bracket, that could trigger less buying of expensive items that these people usually buy: high end cars, multi-million dollar homes, yachts, planes, etc. This would have further detrimental affects on the already fragile economy.

Pedro writes:
Obama's admission that raising taxes on the top 5% would further slow economic growth and hurt job creation during a downturn begs the question, "When is it a good idea to raise taxes and hurt the economy?"

George writes:
How many middle class people do you know who have tax loopholes, or offshore accounts? How many people do you know who make $400,000,000, who fly around in private jets asking for handouts, and how many of these so called good Americans pay their share of taxes without taking loopholes? The answer to your question is, if he had the power, to do it right now.

Lucy from Illinois writes:
No, they have had the gravy train long enough. They won't put any money back into the economy anyway. They would just put it in offshore banks. Give it to the people that need it, and will spend it.

Joe writes:
Yes. Two years should be ample time for the "rich" to figure out how to shelter their income from the proposed tax hike.