What should automakers do to get aid? 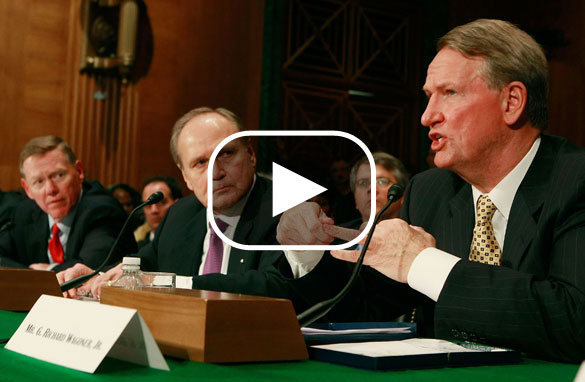 Executives from Ford, Chrysler and GM appeared on the Hill two days this week all but begging for federal aid. They said they needed a $25 billion bridge loan just to stay in business through the end of the year. Well it turns out Democratic leaders want to know exactly what they're going to do with that cash before they push through any legislation granting it.

House Speaker Nancy Pelosi said yesterday "Unless they show us the plan, we cannot show them the money."

So Congress will return next month to consider this $25 billion bailout if, and only if, the companies come up with a "viable" recovery plan to present to them by December 2nd.

It’s interesting that Congress all of a sudden wants detailed plans for the auto industry. Since they forked over $700 billion for the financial institutions, there has been virtually no Congressional oversight on what's been done with that money.

Here’s my question to you: What should the automakers agree to do in order to secure government aid?

END_OF_DOCUMENT_TOKEN_TO_BE_REPLACED

Expectations too high for Obama?

There are high hopes for big change when Barack Obama becomes President of the United States in about two months. The expectations for this man are approaching euphoria and that could be setting the stage for a big disappointment. We've got big problems in this country and no one is going to wave a magic wand and fix them in a matter of weeks or months. It's likely going to take several years.

Some of the president-elect's advisers want to make sure Americans realize this and they're speaking out. One of Obama's top economic advisers Robert Reich, who was Labor Secretary under Bill Clinton, says Obama isn't going to solve the country's economic problems in his first 100 days in office. He told Chicago's CBS2: "This might be a long haul...2009 is going to be a very hard year."

Obama's chief campaign strategist David Axelrod is also cautioning the overly-optimistic. He says: "We are inheriting an array of problems unlike any [a] president has faced, maybe since Franklin Roosevelt in 1932. It's not going to be easy, not going to be quick."

In other words, great hopes and expectations are going to have to be accompanied by patience.

Here’s my question to you: Are expectations too high for Barack Obama’s presidency?

END_OF_DOCUMENT_TOKEN_TO_BE_REPLACED

Next 20 years: How worried are you?

The power and influence the United States has in the world will decline in the next two decades and struggles for the world's natural resources will intensify, according to a new government report.

The National Intelligence Council's "Global Trends 2025: A Transformed World" says the world is in the middle of an historic transfer of wealth from West to East. That's been brought on by increases in oil and commodity prices as well as a shift of manufacturing and certain other industries to Asia.

The U.S. will likely remain the single most powerful nation in the world, but its economic and military strength will decrease considerably. It will continue to play a leading role in the war against global terrorism.

Nations like Indonesia, Iran, and Turkey will likely gain power, and their need for natural resources will increase.

But China is expected to be our biggest rival by 2025. The report predicts it will have the world's second largest economy by then and will be a leading military power.

Here’s my question to you: How worried are you about the next 20 years?