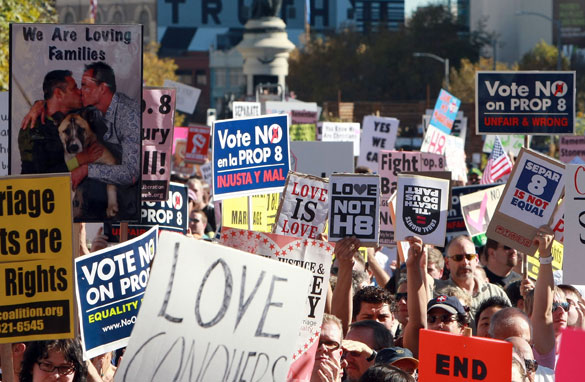 On Election Day, California voters approved Proposition 8, a constitutional amendment that overruled the state Supreme Court's decision this past May to legalize gay marriage.

Protests and petitions by gay rights groups and supporters followed in the days after.

All three cases claim Proposition 8 steps on the civil rights of a "vulnerable minority group."

While the court agreed to review the cases, it stopped short of suspending the ban.

An estimated 18,000 same-sex marriages were certified in California between the spring and Election Day and many of these couples have been left in legal limbo.

According to one gay rights group, the California Supreme Court has heard nine cases challenging ballot initiatives or legislative acts in the last century. The court eventually overturned three of the measures.

Here’s my question to you: Should the California Supreme Court stay out of the recently passed ban on gay marriage?

END_OF_DOCUMENT_TOKEN_TO_BE_REPLACED

How should Obama deal with Iran? 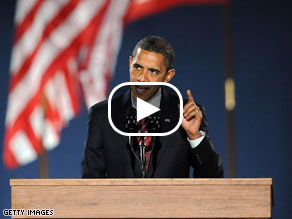 President-elect Barack Obama is inheriting a lot of problems from the Bush Administration including an economic crisis, two wars, and a whole list of international challenges, the most urgent of which is Iran.

According to a new International Atomic Energy Agency report, Iran is continuing to increase its stockpile of uranium and now has enough nuclear fuel to make a single atom bomb.

Iran insists it only wants nuclear energy to fuel power plants, but the United Nations Security Council isn't so sure. It has passed three sanctions resolutions demanding Iran suspend its nuclear program. The Tehran government has ignored them all.

President Mahmoud Ahmadinejad told the United Nations in September, "As far as we are concerned, the nuclear issue is resolved."

The Bush Administration joined European-led negotiations late in the game and actually sent some representatives to Tehran to meet with the Iranians, but to no avail.

Two months from today, it will be Barack Obama's turn. He has indicated a willingness to negotiate with Tehran, but this IAEA report could complicate matters considerably.

Here’s my question to you: How should Barack Obama deal with Iran when he takes office?

END_OF_DOCUMENT_TOKEN_TO_BE_REPLACED

Just 34% have favorable view of GOP: Why?

[cnn-photo-caption image= http://i2.cdn.turner.com/cnn/2008/images/11/20/art.repub.pop.gallup.jpg caption="Only 34 percent of Americans have a favorable view of the Republican Party."]

It's no secret the Republican Party has an image problem. The last eight years of the Bush Administration have been enough to take the shine off just about anything.

But a new Gallup Poll shows just how bad things have gotten. Only 34 percent of Americans have a favorable view of the Republican Party. At the same time, 61 percent have an unfavorable view. That's the highest number since Gallup started tracking this back in 1992. What's more: Only 78 percent of registered Republicans like what they see from the GOP. In other words, almost a quarter of Republicans aren't happy with their own party.

And no one seems quite sure what to do about it. About 37 percent of Americans want the Republican party to become more conservative, but another 37 percent think the party should be less conservative. About 20 percent say it should stay the same.

Here’s my question to you: What does it mean that only 34% of Americans have a favorable view of the Republican Party?