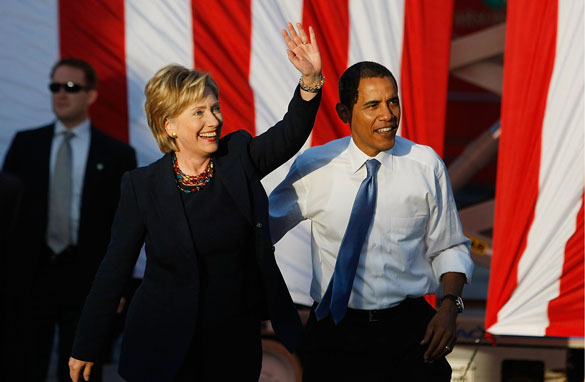 President-elect Barack Obama met with Senator Hillary Clinton last week, and since then, a lot has been made about the possibility of Obama's former rival becoming his secretary of state.

The big question this week is what sort of problems Bill Clinton could cause in the vetting process of his wife. Since he left office, President Clinton has started a new career which involves some "complicated international business dealings." He also has a global foundation with a long list of donors who may not all agree with incoming President Obama's policies.

But the Clintons have been here before. If Hillary gets the "all clear" and is offered the job, the next question is: Should she take it?

After losing the democratic presidential nomination to Barack Obama, Clinton returned to her old job as the junior senator from New York. She's very popular with her constituents and could likely remain in the senate as long as she wants to, perhaps even becoming a senate leader. But if she takes the Secretary of State job, she will tie her career to the successes and failures of the Obama administration. If Obama stumbles, she likely would have an easier time making another run for the White House from the Senate.

Here’s my question to you: What is the proper role for Hillary Clinton in President Obama's administration?

END_OF_DOCUMENT_TOKEN_TO_BE_REPLACED

If Stevens wins, should the Senate expel him?

The Alaska race is of particular interest because it involves a convicted felon, Senator Ted Stevens. Stevens, you may recall, was found guilty in October of seven counts of concealing more than $250,000 in personal gifts. He was the first sitting senator to go on trial in more than 20 years...And just the fifth in history to be convicted of a crime.

But the arrogant Mr. Stevens ran for re-election anyway, sending the message that a convicted felon's place is in the United States Senate. And in the days following November 4th, Stevens held a slight lead over his opponent, the Democratic mayor of Anchorage. He appears now to have lost that lead and is slightly behind. About 24,000 absentee ballots are expected to be counted today, but a few more may come in tomorrow.

Until that's all sorted out, Stevens remains a member of the Senate. Republican Senator Jim DeMint of South Carolina is among those who want Stevens out. But some of his buddies in the Senate want to see whether he actually wins another term before voting on whether or not to expel him. They don't want to be on the record voting to expel a criminal unless they are forced to.

Here’s my question to you: If Ted Stevens of Alaska is re-elected in spite of seven felony convictions, should the Senate expel him?

END_OF_DOCUMENT_TOKEN_TO_BE_REPLACED

[cnn-photo-caption image= http://i2.cdn.turner.com/cnn/2008/images/11/18/art.garbage.ca.gi.jpg caption="Would you rather your state cut services or raise taxes?"]

Americans are feeling pretty cash-strapped these days and as a result, state budgets are feeling squeezed too. Many states are watching tax revenues simply melt away from sales taxes to corporate and capital gains taxes. People aren't shopping like they used to, or traveling, and the stock market's killing everybody - all of which is hurting local governments. And those states with high foreclosure rates? They're getting hit hard too.

According to the liberal-leaning Center on Budget and Policy Priorities, at least 37 states have faced or are facing budget gaps in the 2009 fiscal year totaling $66 billion.

Take California for example. Two months ago, the state faced a $15 billion deficit. Suddenly that number has shot up to $26 billion, and California may not be able to pay its bills this spring.

New York state isn't much better. It faces a $12.5 billion deficit in 2009. Cuts here are expected to include health care and education.

The governors of both states have called special legislative sessions to deal with this financial crisis. As the economy continues to deteriorate, states are facing increasingly difficult choices.

Here’s my question to you: Would you rather your state cut services or raise taxes to cover its budget shortfall?