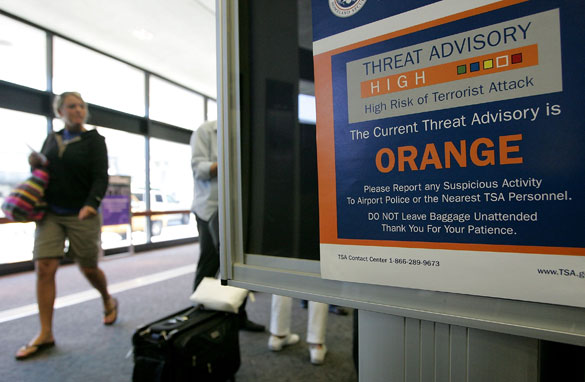 Randy from New York writes:
Another attack is always a concern. After the first World Trade Center bombing, it took almost 8 years for the next more devastating attack. Since we haven't captured the master designer of the 9/11 attacks, it's probably just a matter of time.

Don from Ottawa writes:
Not at all, Jack. The terrorists are achieving what they want without lifting a finger. We are destroying ourselves from within.

Laura writes:
Why bother to plot an attack when they can sit back and watch this country financially implode? George Bush and his crew have been the ultimate gift to al Qaeda.

Mark from Oklahoma City, Oklahoma writes:
Very concerned. I believe that we will be hit again, but only when Bin Laden can be certain that the destruction and loss of life will be much greater than that which took place on 9/11.

Pat from Lexington, Kentucky writes:
I'm concerned and aware, but not anxious or hysterical or paralyzed by the possibility or probability. I don't know what to do to help prevent an attack, and I'm certainly not going to stop everything and hold my breath waiting for it.

Lauri from Baltimore, Maryland writes:
I'm a lot less concerned now than I was on November 3rd.

Bruce from St. Paul, Minnesota writes:
I'm not worried. After all, we have to take our shoes off and surrender our shampoo at the airport. We have a partial fence separating us from Mexico. How could terrorists possibly penetrate a system like that?