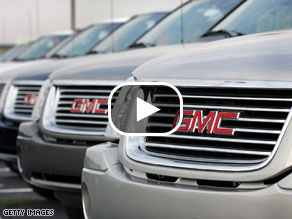 Ann from New Jersey writes:
Yes. Besides hundreds of thousands of Americans losing their jobs, we will be keeping other countries in business by purchasing their cars. The American dream is slowly dying.

John from Rohnert Park, California writes:
No. We are not buying their cars now for good reason. How would temporarily bailing them out help? We're not going to buy them next fiscal quarter either for the same reasons. They need to learn to win in the marketplace as the foreign cars are doing and sell cars that people want.

Jackie from Dallas, Texas writes:
Normally, I’d say no, let them die. However, with the hundreds of thousands, if not millions, of jobs that are tied to them, I can’t see that we can afford to let them go under. Instead, put strings on the money: accountability, no money going to executives in bonuses or perks, immediate retooling to hybrid or alternate fuel vehicles, a significant percentage going to the development of alternate fuels, and a repayment agreement.

Kerry writes:
If we can re-tool our automobile industry to compete with the rest of the world and save hundreds of thousands of U.S. jobs, it would be a huge mistake not to save it.

Joanne from Minnesota writes:
Absolutely not. It's throwing money down a rat hole. They need to restructure via Chapter 11, and the top executives need to be fired.

Jim from El Paso, Texas writes:
Absolutely not, Jack. The government wants to bail out all these companies to keep things going with no real plan. Who's going to bail us taxpayers out? I'm not far from heading under myself along with many others and no one is coming to our aid.

Willy from Michigan writes:
Did the world end when American Motors folded?