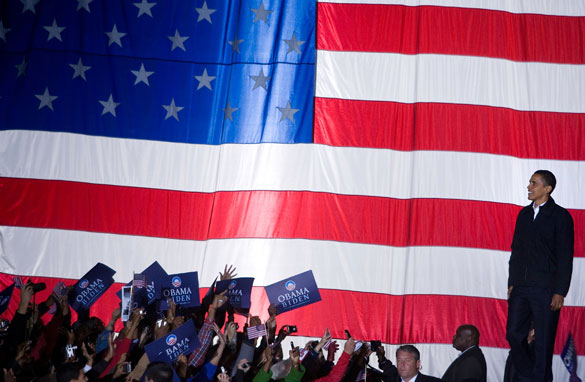 President-elect Obama has said he wants to establish a civilian security force to assist our already-taxed military. He described it as a national security corps that's as powerful and well-funded as the U.S. military, and it would take on the national security burden.

Obama made mention of this in a speech in Colorado in July. That speech has since circulated on the Internet. For some reason, the concept scares people. Republican Congressman Paul Broun from Georgia told the Associated Press, that such a move could lead to Marxism.

He said, "That's exactly what Hitler did in Nazi Germany and it's exactly what the Soviet Union did... When he's proposing to have a national security force that's answering to him, that is as strong as the U.S. military, he's showing me signs of being Marxist."

Broun also said he thinks Obama will move to ban gun ownership if he does build a national police force.

Here’s my question to you: Is President-elect Obama's idea for a civilian security force a good idea?

END_OF_DOCUMENT_TOKEN_TO_BE_REPLACED

Why is there still so much interest in Gov. Palin?

When's the last time a losing vice presidential candidate was still in the news a week after the election? Nobody seems interested in interviewing Joe Biden, or for that matter, John McCain. But we just don't seem to be able to get enough of Sarah Palin.

The news media are scrambling to get her thoughts on everything...the campaign, the charges from within the McCain camp that she is a "whack job" and a "rogue," the $150,000 wardrobe, the travel expenses for her family that were charged to taxpayers of the state of Alaska. It's obviously something besides her keen and subtle grasp of the complexities of being president of the United States.

In fact, her apparent total lack of knowledge of the aforementioned proved to be a handicap to McCain's campaign in the closing stages. A majority of Americans felt Palin was hurting McCain's chances rather than helping them. And yet speculation persists that the Republican Party may decide to hitch its wagon to this hockey mom from Alaska when the 2012 presidential race rolls around.

Here’s my question to you: Why is there still so much interest in Governor Sarah Palin?

END_OF_DOCUMENT_TOKEN_TO_BE_REPLACED

Should the gov’t impose a gas tax to curb consumption?

When it comes to our cars, we have a hard time with the whole concept.

We like to drive and have a long history of having relatively cheap gasoline. But when gas prices hit all-time highs this summer–$4 a gallon and even higher—many Americans had to cut back.

A lot has changed since then.

Oil prices are hovering around 19-month lows and gas prices have dropped for 55 days straight. Forty-six states and District of Columbia now report gasoline selling below $2.50 a gallon. That's the good news. The bad news is there’s evidence we're getting back behind the wheel and returning to our old ways.

What to do? President-elect Obama wants to cut greenhouse gas emissions when he gets to the White House in January. One way to do that is to put a hefty tax on gasoline, big enough that it would force down consumption.

Here’s my question to you: Should the government impose a gas tax aimed at holding down consumption?