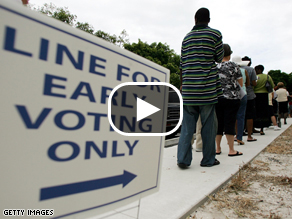 Early voting is under way in more than thirty states. According to some predictions, one-third of the electorate may cast their votes before the polls even open on November 4th. That should ease the burden on Election Day as record turnouts are expected across the country. But not everybody is convinced it will be enough to prevent possible problems.

Questions are already surfacing about the accuracy of the vote in Florida and West Virginia and there is an ongoing battle over voter registration fraud in Ohio. There are concerns we may still not have overcome the voting problems that plagued both the 2000 and 2004 presidential elections. A new CNN poll shows that only 58 percent of Americans are confident that votes will be accurately cast and counted this year. And that's worse than the 72 percent who were confident in 2004.

And we are the shining example of democracy to the rest of the world. Plus we have been doing this for more than 230 years.

Here’s my question to you: What does it mean when the public’s confidence in the integrity of the election continues to decline?

C. from Belen, New Mexico writes:
It means that some things never change. I can remember my grandfathers discussing the questionable goings-on at the polling places during the 1920s, '30s and '40s. The newspaper stories about the same issues in the 1950s and 60s. And my own questions in the '70s, 80s and 90s. As long as some "official" can gain something from shifting ballots or counts that will affect an election, they will do so.

Debbie from Florida writes:
In our age of technology with online banking and the internet, why can't we get the one basic right of American citizens right?

Felicia from Savannah, Georgia writes:
It means that the price of liberty is continued vigilance as Thomas Jefferson stated. Other countries should be aware that democracy is a lifelong battle.

Rick from Boynton Beach, Florida writes:
It says to me that the outcome means less and less, and is not indicative of the desire of the total population. In this age of technology, to have this primitive method of voting is ridiculous. Standing in line for hours, on a workday—a Tuesday– no less, and then having to hope the archaic contraption accurately records your vote. Stop the insanity.

Dave from Missouri writes:
It means they are probably too stupid to vote. If they think this voting system is bad, try going to the Middle East or almost anywhere else in the world. People just like to complain. Get up Election Tuesday, go to the polls, follow directions and all will be fine!

Al from Canada writes:
America has always sent observers abroad to oversee election procedures that they are run fairly. Who is coming to do the same in America?

M.D. from Cedar Rapids, Iowa writes:
I wouldn't be surprised if the voting machines in my district register a 3rd term for Bush.