Why are so many voters still undecided? 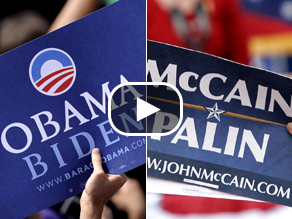 After the longest and most expensive presidential campaign in history, 7% of likely voters are still not sure who they're going to vote for. And the election is now less than two weeks away. These are the findings in the latest CNN Poll of Polls. So what's the problem? Maybe if you haven't figured it out by now you should not be allowed to vote.

Maybe it's the issues. We've had three presidential debates, one vice presidential debate, one economic meltdown, a $700 billion financial bailout package, a couple of wars and countless arguments about under whose plan you and I would pay more in taxes and for health care.

Or maybe it's the mud-slinging…a CNN-Opinion Research Poll found that 3 out of 5 Americans feel the McCain campaign has gone too negative. Another survey by the Associated Press and Knowledge Networks found that negative ads from both candidates aren't convincing the uncommitted–about 60% of undecided voters say the ads make them no more or less likely to vote for John McCain or for Barack Obama. And one-third say they're less likely to vote for either candidate after seeing these negative ads.

Here’s my question to you: Why are so many voters undecided so late in the race?

Bill writes:
There is no way that 7 percent of the electorate is undecided at this stage in the process. Uninformed, uninterested, unwilling to share? Perhaps. But not undecided.

Greg from Miami, Florida writes:
When making a decision some people start out without a goal. They don't exactly know what they're looking for, but they'll somehow recognize it when they see it. You might say they're looking for inspiration. So I'm guessing that those who haven't decided yet don't really know what they want in the next president, and they haven't been sufficiently inspired by either candidate.

R.L. writes:
Real simple. I hate both candidates. I hate having to choose between two totally terrible choices. I am a veteran and have fought for my country, sacrificed for this country, and love this country. I feel there is no party that truly represents me and my family.

Chris writes:
People who have not yet made up their mind by this point apparently have no mind to make up. You have to be a wingnut to still be on the fence in this election.

Al writes:
You hit the nail on the head, Jack. Anyone who hasn't been able to make up his mind about this race at this point - after two years of campaigning and three debates - lacks the mental acuity to make such an important decision. And that's what scares me. The future of our country is essentially in the hands of these swing voters. Why should the rest of use be subject to the whims of people I wouldn't trust to decide if I "want fries with that?"

John from Santa Barbara, California writes:
It's like a girl thing. They have made up their minds, but they just love being asked.