Should the first presidential debate be postponed? 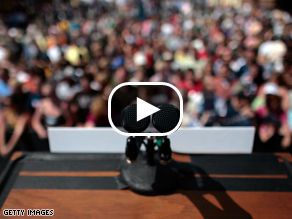 Senator John McCain suddenly announced this afternoon he is suspending his campaign and returning to Washington to lend a hand in the search for a solution to the nation’s deepening financial crisis.

President Bush is expected to address the nation later this evening and try to convince Americans the situation is so dire that Congress must pass the proposed $700 billion bailout bill. Trouble is, the public isn’t so sure it wants to hand the government another blank check for that much money.

McCain has also called for the postponement of the first presidential debate scheduled for this Friday night in Mississippi.

Barack Obama says the debate should go on as scheduled. It might be helpful, particularly to voters who remain undecided, to hear the two men who want to lead the country for the next four years discuss their ideas for solving what is arguably the worst financial crisis to hit the United States since the Great Depression.

Here’s my question to you: In light of the financial crisis, should the first presidential debate be postponed?

Kathleen from Oak Park, Illinois writes:
You're kidding, right? Sen. McCain can't think the American people– and especially the all-important undecided independents– are naive enough to be fooled by this latest stunt. If McCain can't juggle several challenges at once, what will he do in the White House? And if he wants to go to Washington, relocate the debate to D.C. Study up, John. America is waiting to hear what you have to say Friday night!

David from New Jersey writes:
McCain is just trying to avoid the debate because he won't be able to handle the questions. It is that simple.

Susan writes:
Absolutely not. John McCain called off the Republican Convention the day George Bush was set for his live address, citing Hurricane Gustav. He chose the woefully inexperienced Sarah Palin and is now preventing the American public from hearing from her, or even seeing her beyond staged photo ops. Now he wants to delay the debates out of concern for the finances of the nation? I have one question for you, John McCain: just how stupid do you think I am?

Stan from Buffalo Gap, Texas writes:
Jack, absolutely the Friday night debate should take place. Under the current circumstances, however, the topic should be the economy instead of foreign policy. Now more than ever we need to hear from both the candidates on how to deal with this dire situation involving the financial markets and potentially affecting all of us. Bring on the debates!!

Eric writes:
I'm with McCain on this one. There is still plenty of time to schedule the debate for another day and be able to express his opinions. But now is not the time for debating over the future, when such an important crisis needs to be dealt with now. Once a plan has been approved, and we know what we're doing, then discuss the future.

Sam writes:
No. This is McCain's way of trying to sneak out of having to face economic issues. He fears Obama has the lead in the polls and wants to short-circuit that. Both senators can register their ideas with the Congress without being present.

Paul writes:
Sure. Although, since one candidate broke and ran, it might be a bit one-sided, wouldn't you say? We see who needs the Washington comfort zone now.