What will you look for at the Presidential debates?

With the polls tightening, the stakes for the upcoming presidential debates are getting higher. The first of three debates is set for this Friday in Mississippi. Despite all that is already known about John McCain and Barack Obama, presidential debates are famous for sometimes producing a moment that will change the outcome of the election. The pressure is definitely on.

The Wall Street Journal reports that Obama's advisers are looking for ways for Obama to provoke McCain's anger or to show that he's out of touch with the average American. McCain's advisers are coaching McCain to pounce on certain phrases Obama may say like "as I’ve said before..." A McCain aid told The Journal Obama uses that phrase on occasions where he's actually changed his mind.

The first debate was supposed to cover domestic issues, but both campaigns agreed to change it to foreign policy. McCain's camp feels foreign policy is his strong suit. Obama's advisers want to hold off on a domestic issues debate because they believe Obama will have the upper hand in that discussion.

Here’s my question to you: What will you be looking for when you watch the debates?

END_OF_DOCUMENT_TOKEN_TO_BE_REPLACED

What does it say when Palin is meeting heads of state & Clinton hosts Farm Day? 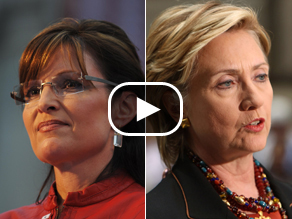 In Washington, meanwhile, former Presidential hopeful Senator Hillary Clinton is having some high-powered meetings of her own. She is hosting the seventh annual New York Farm Day. The guest list, according to her office, includes: "producers of New York's award-winning wines, farm-fresh products, and fresh seafood."

Who would have thought a couple of months ago that Clinton would be showcasing her state's agriculture industry while a first time governor and hockey mom who just got her passport last year would be meeting with heads of state at the UN?

Here’s my question to you: What does it say that Sarah Palin is meeting with heads of state at the UN while Hillary Clinton is hosting Farm Day?