How can your faith in government be restored?

House Speaker Nancy Pelosi told MSNBC yesterday that the Democrats do not bear any responsibility for the mess on Wall Street.  Democrats have had control of congress for the past 2 years, and Republicans pointed out they haven't passed any legislation regulating congressional excesses.

If they had tried, it probably wouldn't have mattered.

The White House likely would have vetoed it or Republicans in the Senate would have blocked it, and it never would have passed to begin with...

Whether it's the economy, energy or foreign policy, the interests of the American people increasingly take a backseat to partisan politics, finger-pointing and the blame game.

There's no commonality of purpose to cooperate in the interests of our citizens. The parties only pretend to care about us, but they don't really.

What they care about is holding onto power at all costs - which is why this presidential election is going to "cost" in the neighborhood of one billion dollars.

And you can bet Congress will take its next vacation the end of this month right on schedule.

Here’s my question to you: What would it take to restore your faith in our government?

END_OF_DOCUMENT_TOKEN_TO_BE_REPLACED

Palin is more popular than McCain and Obama

Politics is a popularity contest and if you are keeping count on the blogs, V.P. candidate Governor Sarah Palin is the belle of the ball. On a single page of an ABC news blog, Palin's name appears 24 times, McCain's twice, Biden's once and Barack obama's– not at all. It's not scientific, but it's indicative of something bizarre.

And she's a big hit offline too.

When Palin and her running-mate John McCain– he's the one running for president by the way– appear together, people cheer for her. Then when he speaks they begin to file out. Ouch! When they campaign separately, her crowds dwarf his. What's wrong with this picture? He has all the experience and she has very little.

In today's New York Times, columnist Maureen Dowd suggests the Palin phenomenon is like a trip back to junior high school...Where the popular girl gets all the attention.

Here’s my question to you: What does it say about us that Sarah Palin is attracting more attention than the two men who would be president?

END_OF_DOCUMENT_TOKEN_TO_BE_REPLACED

Will McCain’s statements about the economy cost him the election? 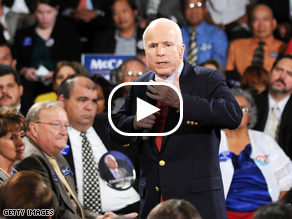 We awoke this morning to news the government is loaning the nation's largest insurance company, AIG, 85 billion dollars to keep it afloat.

Then we sat back and watched the bottom continue to fall out of the stock market.

The former Chairman of the Federal Reserve, Alan Greenspan, said we are experiencing a "once in a century financial crisis." which may be why democratic strategist and CNN political commentator James Carville said on the Situation Room yesterday that the comment from John McCain on Monday about the economy being “fundamentally sound” was a game changer.

That was the day that Lehman Brothers filed for bankruptcy and the Dow lost more ground than it had in seven years.

Carville said unless something totally out of the ordinary happens, the stupidity of McCain's remark virtually assures Obama of a win in November.

Oh, and you probably won't be seeing much of McCain adviser Carly Fiorina in the future either.
She told a radio host yesterday that neither John McCain nor Sarah Palin, quote, "could run a corporation."

That's the kind of stuff you expect the Democrats to say.

Here’s my question to you: Was John McCain's statement that the economy is fundamentally sound a fatal error?