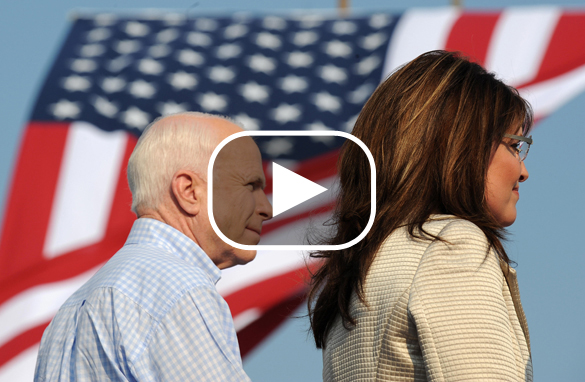 The Washington Post reports that the head of McCain's vetting team didn't do an in-depth interview with Palin until the day before she was offered the number two slot. Click the play button to see what Jack and our viewers had to say. (PHOTO CREDIT: GETTY IMAGES)

When it comes to Alaska Governor Sarah Palin, the hits just keep on coming.

Some of the latest revelations surrounding John McCain's surprise choice of a running mate: The Associated Press reports a private lawyer has been authorized to spend $95,000 dollars of state money to defend Palin in the trooper ethics probe. Contrary to her message of reform, Palin worked to get pork barrel projects for her city and state. Also, according to the A.P., her husband was once a member of the Alaska Independence Party, some members in that group advocate that Alaska secede from the Union. Also, the boyfriend of Palin's 17-year-old unmarried pregnant daughter is expected to join the family at the GOP convention.

The McCain camp is pushing back hard, calling questions about Palin's background a "faux media scandal designed to destroy the first female Republican nominee" for V.P. and suggesting Palin is a victim of gender bias in the media. Where have we heard that before? They insist Palin was subject to a "long and thorough" vetting process. Really? The Washington Post reports that the head of McCain's vetting team didn't do an in-depth interview with Palin until the day before she was offered the number two slot.

Some are wondering if Sarah Palin could turn out to be another Harriet Miers, a vastly underqualified woman who was nominated by President Bush to become a Supreme Court Justice. Miers later had to withdraw her name from consideration. Gee… there's that parallel again.

No presidential candidate has withdrawn his V.P. pick since Democrat George McGovern in 1972. McGovern dropped Thomas Eagleton after 18 days as revelations surfaced about his mental health. Eagleton, too, had been a last minute pick.

Here’s my question to you: Should John McCain consider replacing Sarah Palin on the GOP ticket?

END_OF_DOCUMENT_TOKEN_TO_BE_REPLACED

What do you want to learn about Palin from tonight’s speech?

[cnn-photo-caption image= http://i2.cdn.turner.com/cnn/2008/images/09/03/art.palin.rnc.ap.jpg caption="Govenor Palin has not taken any reporters’ questions since being named McCain's V.P., with the exception of an interview with People Magazine."]

Talk about pressure – Sarah Palin tonight will give arguably the most important speech of her life.

It will be the first chance for most Americans to get to know John McCain's surprise pick for V.P. Although she's been all over the news since Friday, Governor Palin hasn't taken a single question from a reporter with the exception of a People Magazine interview.

Part of the reason is she has apparently been hunkered down with members of the McCain camp preparing tonight's speech. One senior adviser says while the Democrats and media have done a great job lowering expectations "We're gonna raise some expectations tonight."

Palin is expected to hit on three main themes. The economy and why Republicans are better equipped to deal with it as well as Palin's own experience with the energy economy. Next is to make the case for McCain against Barack Obama, when it comes to both policy and character. And last, to give the public a better sense of what kind of person she is – Palin is described by campaign aides as likable, funny and smart.

The stakes don't get much higher. Palin is certainly in a higher risk position than Joe Biden was last week, since he's been on the national stage for decades. And as a newcomer to national politics, Palin will have to prove she's up for the job and calm any questions about her experience, which is thin to non-existent, when it comes to foreign policy or the qualifications to be commander-in-chief.

Here’s my question to you: What do you hope to learn about Sarah Palin from her speech tonight?

END_OF_DOCUMENT_TOKEN_TO_BE_REPLACED

Why are Dems more enthusiastic about election? 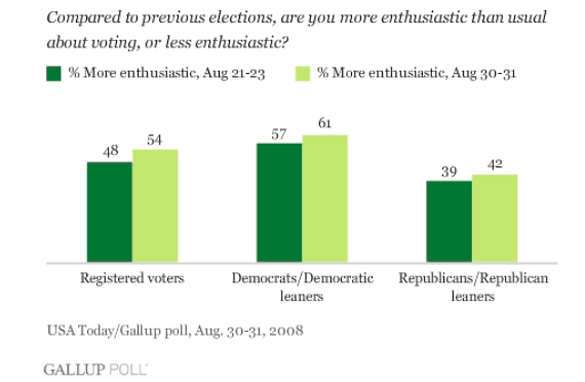 While the Republican delegates and party officials scream and stomp their feet in support of John McCain in St. Paul, it turns out the rest of the Republican Party is less fired up about the election than the Democrats are.

A new USA Today/Gallup poll shows a slight increase in voter enthusiasm among both parties since the Democrats held their convention and McCain named Sarah Palin as his running mate.

But, Democrats hold a significant lead: 61% of them say they're more enthusiastic than usual about voting this time around, compared to just 42% of Republicans who feel that way.

It's worth noting that there's been a decline in voter enthusiasm since January and February when the numbers were off the chart during the heated primary season. In fact, levels of voter enthusiasm are now lower than they were in 2004 at this same time.

Part of the reason might be that some people have gotten tired of what seems like a never-ending race to the White House. Also, Gallup suggests the decline in Democratic enthusiasm could be due to the disappointment of Hillary Clinton supporters.

Nevertheless, the Democrats hold the edge – and it's something that couldn't be missed in the excitement and size of that crowd at Invesco field last week, much like the crowds Barack Obama has been drawing since he entered this race.

There's no question that for either Obama or McCain to win in November, they're going to have to rally their bases and get their supporters out to the polls.

Here’s my question to you: Why are Democrats more enthusiastic about the election than Republicans are?