Click the play button to see what Jack and our viewers had to say. (PHOTO CREDIT: AP PHOTO)

So what does McCain do? He picks someone to be his running mate who is even younger than Barack Obama and has less experience.

Sara Palin is 44 – Obama is 47. Sara Palin is in her first term as governor of Alaska, a state that has 13 people and some caribou. Obama is a member of the United States Senate from Illinois.

It's not a big deal, except for this: If McCain wins, he will be the oldest person ever inaugurated for a first term at 72. He has a history of health problems that include bouts of melanoma, a potentially deadly form of skin cancer. It is reasonable to consider that McCain's running mate could be called upon to be our president.

Meanwhile, some may see this as a move for McCain to attract disaffected women who voted for Hillary Clinton and aren't yet behind Obama. But that might not work for a few reasons: Palin, like McCain, is pro-life. Also, she might be a woman, but she's no Hillary Clinton – when it comes to her experience or her ideology.

At some point, voters will have to ask themselves who they would want running the country if it ever became necessary: Joe Biden or Sarah Palin.

Here’s my question to you: Does John McCain undercut his own message by naming someone even younger and more inexperienced than Barack Obama to be his running mate?

END_OF_DOCUMENT_TOKEN_TO_BE_REPLACED 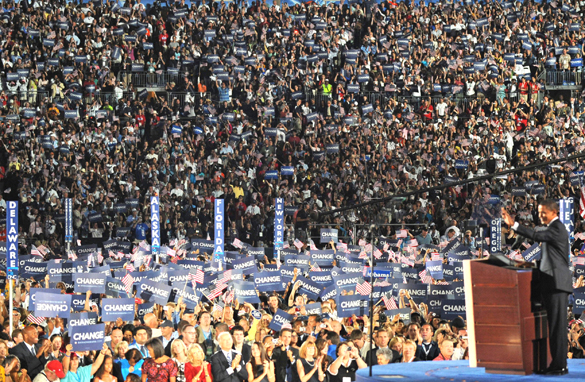 Obama's campaign is encouraging his supporters to reach out to unregistered voters.(PHOTO CREDIT: GETTY IMAGES)

"We are here because we love this country too much to let the next four years look just like the last eight."

And with that, Barack Obama accepted his party's nomination in front of 84,000 people in Denver, Colorado. It was the climax to a political convention unlike anything anyone's ever seen before.

To the relief of many Democrats, Obama ripped into his rival John McCain, painting him as out of touch with ordinary Americans, "It's not because John McCain doesn't care... it's because John McCain doesn't get it." Obama described his own upbringing by a single mother and grandmother, food stamps, student loans, etc. – saying "I don't know what kind of lives McCain thinks that celebrities lead, but this has been mine."

He referenced McCain's famous temper, saying he's ready to debate McCain on who has the temperament, and judgment, to be commander in chief. The crowd ate it up.

But the Democratic convention is now over and Obama and Joe Biden have just 67 days to close the deal with voters. They started today with a bus tour of the battleground states of Pennsylvania, Ohio and Michigan.

Obama's campaign encouraged his supporters to text message friends and call thousands of unregistered voters. The campaign says it's identified 55 million unregistered voters across the country – including about 8 million blacks, 8 million Hispanics, and 7.5 million people between the ages of 18 to 24. These Americans could elect our first African-American president.

Here’s my question to you: In the final 67 days, what does Barack Obama have to do to win the White House?