How much do you have in common with Obamas? 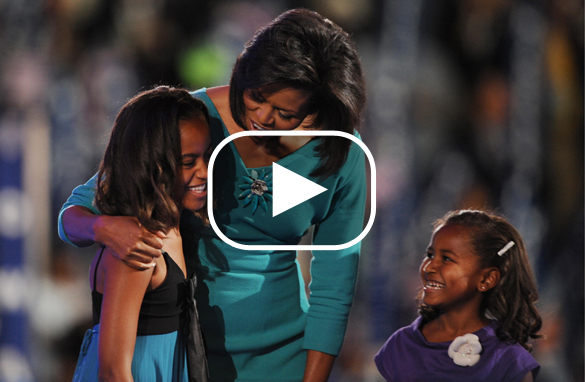 Click the play button to see what Jack and our viewers had to say.(PHOTO CREDIT: AP PHOTO)

Michelle Obama's speech last night was meant to convince Americans that her family is just like the rest of us.

The wife of the presumptive Democratic nominee talked about things like family and hard work – that should resonate with millions of people across the country. The idea is to calm the fears of some that Barack Obama is different and unknown with an exotic background.

Michelle Obama described herself as a daughter, wife and mother coming from a blue-collar background – her dad was a city worker in Chicago. She talked about the anxiety her husband felt when driving their oldest daughter home from the hospital as a newborn, and what she thinks about when she tucks her two girls into bed at night.

Mrs. Obama said her husband is an ordinary man, joking about his love of basketball. She talked about his being raised by a single mother and grandparents who "scrimped and saved" so they could give him opportunities they never had. She also tried to put to rest questions about her own patriotism, declaring,"I love this country".

At the end of her speech, viewers were treated to an unscripted moment between her two young daughters and her husband via a live video hookup. The girls evaluated their mom's speech and told their "daddy" that they loved him. A moment that could go far in cementing the image of the Obamas as an American family like any other.

Meanwhile, a new Gallup poll suggests Michelle's speech could make a difference, with more than half of Americans saying a candidate's spouse is an important factor in their vote.

Here’s my question to you: How much do you feel you have in common with Michelle and Barack Obama?

END_OF_DOCUMENT_TOKEN_TO_BE_REPLACED

Higher taxes a sure thing with next president? 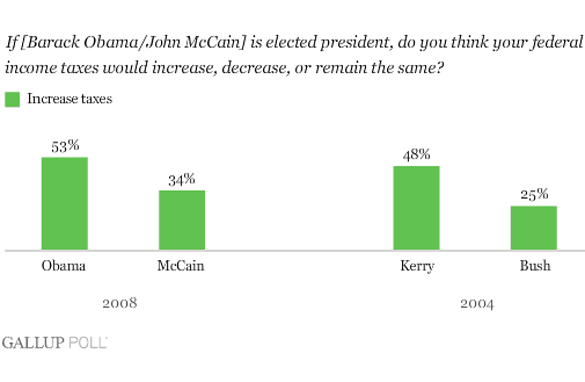 During these shaky economic times, many Americans are betting on higher taxes – no matter who the next president is.

A new Gallup poll shows 53% of those surveyed think Barack Obama would raise their taxes as president; 34% think John McCain would hike taxes if he gets the job. Both of these numbers are higher than what Americans expected from John Kerry and George Bush last time around.

And, what's especially interesting is that a substantial number of independents – that ever-important voting bloc – think their taxes will go up under either candidate.

Republican John McCain has pledged to renew President Bush's tax cuts, which he opposed twice while in the Senate. However after he promised not to raise taxes, McCain now says nothing can be ruled out in order to keep Social Security solvent.

As for the Democrat, Barack Obama, he's said he'll raise income taxes on the wealthiest but provide a tax cut to middle class Americans.

Although more people think their taxes would go up under an Obama administration – they also think he is better equipped to handle the issue of taxes. Gallup suggests this may be because a majority of Americans think Obama's policies will benefit the middle class and the poor most... while they think McCain's policies will help the wealthy.

Here’s my question to you: Are higher taxes inevitable with the next president?

END_OF_DOCUMENT_TOKEN_TO_BE_REPLACED

[cnn-photo-caption image= http://i2.cdn.turner.com/cnn/2008/images/08/26/art.clinton.plane.gi.jpg caption="The Washington Post reports that some of Clinton's top advisers will be absent for Obama's speech on Thursday."]

Hillary Clinton is expected to be a cheerleader for party unity when she takes the stage tonight in Denver, but there may be less there than meets the eye. Reports are that tensions continue to run high between the Clinton and Obama camps.

The Washington Post reports that some of Clinton's top advisers will leave town before Barack Obama accepts the party's nomination on Thursday night – that includes Terry McAuliffe who was Clinton's campaign manager.

One Clinton supporter who is staying on for Obama's speech says it would be unrealistic to expect that there wouldn't be tension between the two groups... and that the convention is a good chance for the two groups to bond – which is hard if you're leaving Denver.

Two longtime Clinton backers who are leaving early have excuses: one says it's for his daughter's weekend wedding and the other for an overseas business trip.

Nonetheless, the Democratic Party is probably not as unified as Barack Obama and many others were hoping it would be at this point. Obama was forced to address reports that Hillary Clinton was never even vetted to be his running mate, saying he did in fact consider her. Meanwhile, John McCain is now out with his 4th ad using Hillary Clinton's words from the primaries against Barack Obama. The infamous 3 A.M. ad is back with the announcer intoning, "Hillary was right."

This is not the way the Democrats drew this up.

Here’s my question to you: What message does it send when some of Hillary Clinton's top advisers plan to skip Barack Obama's acceptance speech?

END_OF_DOCUMENT_TOKEN_TO_BE_REPLACED

"It's not like [the Clintons] have been bending over backwards to help Obama get elected," says Jack Cafferty.

If you look closely this week, you might catch a glimpse of Barack Obama at the Democratic National Convention in between appearances by the Clintons. Hillary Clinton is doing her dead-level best to take title to Obama's moment in the sun.

She lost. He won. She and her family will be everywhere.

She speaks tonight. Chelsea Clinton will introduce her. She will be preceded by a video produced by her own people, the same ones who produced the "Man from Hope" for Bill Clinton. He will speak tomorrow.

The Clintons will also use the convention to raise money to retire her campaign debts. They even came up with a cute little contest. Hillary Clinton awarded one lucky donor a trip to the convention with her.

And as an enticement to cough up some bucks, Bill Clinton sent an e-mail to potential contributors promising a memorable week with his wife. (Insert your own joke here)

He said, "You'll get to see Hillary speak on Tuesday and Barack Obama - the next president of the United States - on Thursday. And I hear Hillary and you will have a chat - I'll make sure I stop by."

Makes you want to borrow money against your house, doesn't it?