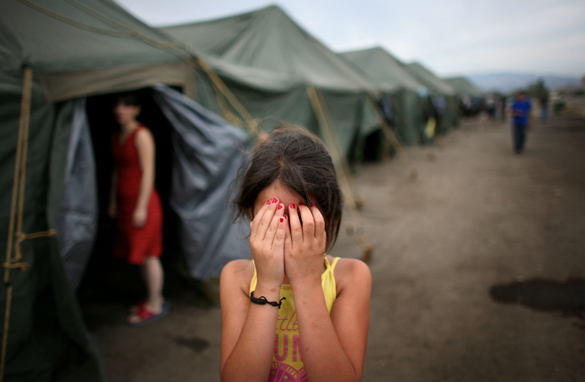 Stephanie from Minneapolis, Minnesota writes:
Are we seriously discussing donating $1 billion to Republic of Georgia when the Gulf Coast STILL lies in ruins from Hurricane Katrina?

Alex from North Carolina writes:
A problem we didn't create is not a problem we should pay for, unless we can borrow it from China. Oh that’s right. We have been there and done that. Obama you have lost a voter!

Billy from Las Vegas writes:
The Russians broke it. Let them pay for it. We have enough problems in our own State of Georgia (and the other 49).
Maybe they can get a loan from the Iraqis? They got $79 BILLION dollars sitting in various banks.

George from Tacoma, Washington writes:
Yes, if we allow the Russians to reassert their control over the region, 1 billion dollars will be nothing compared to what we will spend out of fear. We will spend less than we would later if we bail on them… Stop them now and stop them fast. It's a bargain.

Bill from Tampa, Florida writes:
What would a Billion dollars do to help support our education system? It would do a Hell of a lot! There would be no more schools with Asbestos, no more outdated books. The answer is No Jack!!!!!

Rufus from Twentynine Palms, CA writes:
Jack, you owe me a new keyboard for my computer…I just spat Diet Dr. Pepper all over it when I read this question. It convinced me that you missed your calling as a stand-up comedian. If we have that kind of money to spend cleaning up Russia’s messes, then send me a few billion so I can build that EPIC Jack Cafferty Comedy Club in Branson, Missouri…a monument to the funniest old curmudgeon that ever lived.