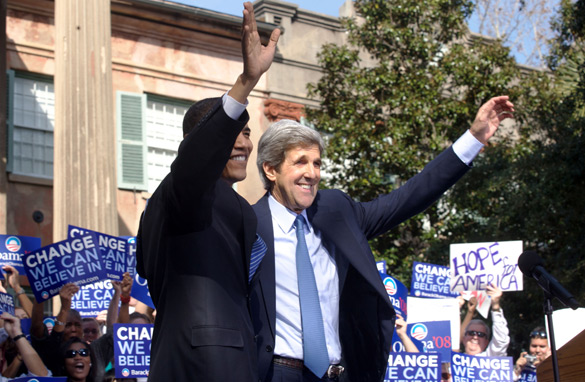 Deborah from North Port, Florida writes:
Absolutely he can. When we choose to be ignorant, it's easy to fool most of the people most of the time. Too many Americans can't think for themselves long enough to even try to discern the truth - and they don't care. If the truth really mattered, Rush Limbaugh wouldn't be making $400 million and Bush and Cheney would have long ago been impeached, removed from office, and deposited at The Hague. Truth? Please. It's a casualty of political war.

Mike writes:
Kerry's swift-boating demise was as much his fault as the swift-boaters. The guy couldn't give a straight answer to save his life, and was slow to pull up people who were there who could refute the swift-boaters’ lies. Obama has a machine in place that can rapidly expose the liars for what they are this time.

Nick writes:
Jack, The success of the swift boaters was in a large way due to the lack of due diligence on the part of the media. Instead of doing any real investigative reporting and finding that the swift boaters were, in fact, fabricating their stories, the media took what they said as fact and waited for Kerry to defend himself. I would hope the media would take a more professional, responsible approach to this.

Kathy from Stamford, Connecticut writes:
They can sink another Democrat if voters remain as utterly naive and stupid as they did in 2004. There are still educated Americans out there saying they're not sure about Obama because "he's a Muslim or something." I mean these are the folks who gave us Dubya - TWICE!

Mickie from Philadelphia writes:
He doesn't have to. Hillary is doing a fine job of sinking the entire Democratic Party herself. The Democrats always seem able to snatch defeat from the jaws of victory.

Susan writes:
Kerry sunk himself by not fighting back. Obama will show this book for the fairy tale it is. This author has a hole in his boat and his head.