What should be done to save Afghanistan? 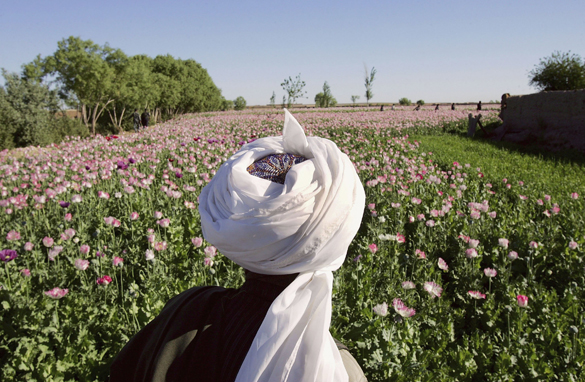 Afghan farmers say that they depend on the cash they earn from poppy, which provides ten times what they could earn from growing legal crops. (PHOTO CREDIT: GETTY IMAGES)

"Afghanistan is in misery." That's the assessment of retired four-star Army General Barry McCaffrey. He just spent a week visiting NATO Headquarters and Afghanistan... and reports back on a truly dismal state of affairs.

Almost 70% of Afghanistan's people have never known peace. The life expectancy is only 44 years and the country has the second highest maternal mortality rate in the world: 1 in 6 pregnant Afghan women dies for every birth.

Terrorist attacks and insurgent violence are on the rise, with more casualties now in Afghanistan than Iraq. The government is mostly dysfunctional and corrupt. Unemployment is at 40% and rising. Although an overwhelming majority of the Afghan people rejects the Taliban, they have little faith in the government to provide basic services and security.

General McCaffrey insists we can not win this war solely with military might. He stresses the need for a larger Afghan army and police force in addition to more U.S. troops. He believes we also need to help fix the Afghan agricultural system, and that the international community must demand the end of the drug crops.

Here's the key: McCaffrey calls Afghanistan a "narco-state”. The Taliban, Al Qaeda and war lords are mostly funded by an estimated $800 million a year coming from the $4 billion opium and cannabis industry. These crops are up sharply in recent years – with the industry employing more than 3 million workers, addicting hundreds of thousands of Afghans and providing the money necessary to corrupt the government and the justice system.

Here’s my question to you: What should be done to save Afghanistan?

END_OF_DOCUMENT_TOKEN_TO_BE_REPLACED

[cnn-photo-caption image= http://i2.cdn.turner.com/cnn/2008/images/08/04/art.obama.press.gi.jpg caption="Obama said he will not “support a plan that suggests this drilling is the answer to our energy problems.”"]

Barack Obama has changed his tune on offshore drilling.

In a reversal, he now says he'd be willing to compromise on his position against offshore drilling if it is part of a more comprehensive energy strategy that can lower gas prices. He praised a Senate bipartisan energy plan that combines alternative energy, nuclear energy and drilling. Obama insists his position is nothing new, and that he won't settle for a plan that suggests drilling is the only answer to our energy needs.

But, the fact of the matter is Obama has been speaking out against offshore drilling since John McCain made his own reversal in June – when he suggested we do away with the federal ban. In June, Obama told Florida voters that he intended to keep the moratorium in place to protect the coastline. Even as recently as Thursday, Obama called McCain's proposal "a strategy designed to get politicians through an election".

Polls show that most Americans support an increase in offshore oil drilling, 69% to 30%... although the public is split as to whether drilling would mean lower gas prices next year.

Meanwhile, another flip-flop from Obama on energy matters came today when he proposed the government sell 70 million barrels of oil from the strategic petroleum stockpile. He says this could help lower gas prices in the short term. But, in the past, Obama was against tapping into the reserve. His campaign says he reconsidered because "Americans are suffering".

Here’s my question to you: Why has Barack Obama changed his tune when it comes to offshore drilling?

END_OF_DOCUMENT_TOKEN_TO_BE_REPLACED

Should Obama consider Clinton for V.P.?

When it comes to Hillary Clinton – not so fast.

Some Democrats are worried that Barack Obama isn't farther ahead in the polls at this point, especially when you consider the unpopularity of President Bush, the often unfocused campaign being run by John McCain and Obama's successful trip overseas. Suddenly some are wondering whether Obama should reconsider putting Clinton on the ticket.

CNN Senior Political Analyst David Gergen points out that the major tests for a V.P. pick are whether the person is qualified to be president, and if that person will give you a better chance of winning. Clinton predicted during the primaries that the Republican attack machine would be in full bloom against Obama. One columnist wrote – reacting to some of McCain's recent ads – "The swift boats have sailed," a reference to the Republican smear campaign that destroyed John Kerry's chances. Gergen suggests there's no one better than Hillary and Bill Clinton to fight off such attacks.

Clinton supporter Lanny Davis points to a recent poll that shows Obama holding a 1-point lead over McCain, but when voters were asked to choose between Obama-Clinton versus McCain and Mitt Romney the Democrats' lead then jumps to 9 points. This strongly suggests that even though Clinton might drive away some voters, she has the potential to bring in even more. Davis suggests Obama could not lose with Clinton on the ticket, as she would shore up key voting blocks.

Meanwhile, there are indications from some former Clinton supporters – particularly those in the women's movement – that if Obama picks anyone but Clinton, the divisions from the primary season just might not heal. They are adamant that Obama can't assume Clinton's supporters will back him regardless of whom he picks as V.P.

Here’s my question to you: Should Barack Obama be seriously considering Hillary Clinton for V.P.?