Do a candidate's looks matter? 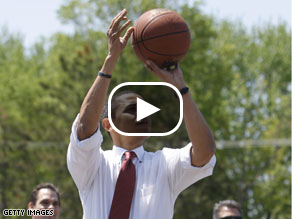 "He needs to put some meat on his bones." "I won't vote for any beanpole guy.” These are people talking about Barack Obama and why they can't relate to him.

The Wall Street Journal reports today on whether Obama's skinniness could wind up being a liability for him in this election, particularly in a country where two-thirds of the voting-age population is overweight and one-third is obese. A recent poll shows Obama still trails John McCain among white men and suburban women who say they don't see eye-to-eye with the Illinois senator's background or values.

Obama's doctor says he works out regularly, jogging up to 3 miles a day when he can and that he has "no excess body fat." He plays basketball and bikes. Obama even took some heat from the press for working out too much recently – when he went to the gym in Chicago three times in one day, for a total of 188 minutes.

He apparently stays away from junk food – his daughter has said he doesn't like ice cream or sweets – and instead snacks on protein bars and organic tea. Obama has reportedly quit smoking several times.

A former staffer to President Clinton points out that while most voters don't choose a president based on looks alone, things like a candidate's height, weight and overall appearance can play into what they see as quote "presidential." Others point out that struggling with weight loss – much like Bill Clinton did – could endear a candidate to voters and make him seem more human.

As for John McCain, although he has injuries from when he was a POW in Vietnam, his doctor says he walked the Grand Canyon "rim to rim" 2 summers ago and hikes whenever he can find the time.

Here’s my question to you: How much does a candidate's physical appearance matter to you?

James from New York writes:
Jack, Truthfully speaking, among televised, highly-publicized people, looks do matter. You have to look like a winner if you are going to lead a nation of winners. Looks, however, only get you so far and then you have to dazzle them with your brilliance. Barack Obama just looks presidential and when he speaks you can feel the Harvard education coming out of him. While his opponent sure was something a couple of decades ago (sorry, but it’s true).

Shirley from Ohio writes:
Sadly, Jack, it does. I never watch the State of the Union addresses. But if Obama wins, I will watch it – not only because he is an intelligent person, but also because he looks good. It is kind of like when The Rock was on WWE wrestling; my boys had to call me when it was time for him to wrestle. Now that he no longer wrestles, I do not watch it anymore.

Nancy writes:
Is there anything else that is going to be a disadvantage for Obama? He's too skinny. He's too black. He's too smart. He's too arrogant. He's an elitist. He's a celebrity. Give me a break. For those people who are trying to find any excuse not to vote for him, why don't you just call yourself a racist and get it over with.

Karen writes:
Jack, Looks don't matter to me. I was never at that stage where I needed to have a drink with the president. I would rather have a president who doesn't drive me to drink. Therefore, I don't think looks are all that important. I would however, appreciate having a president who has a brain and is able to string together sentences cohesively.

Paul from Mill Valley, California writes:
Not at all – unless you're old, bald and stupid.

John from Santa Barbara, California writes:
If he could get us out of this mess, I'd vote for Jabba the Hut.

Jed from Texas writes:
If Howdy Doody can become president, anyone can.