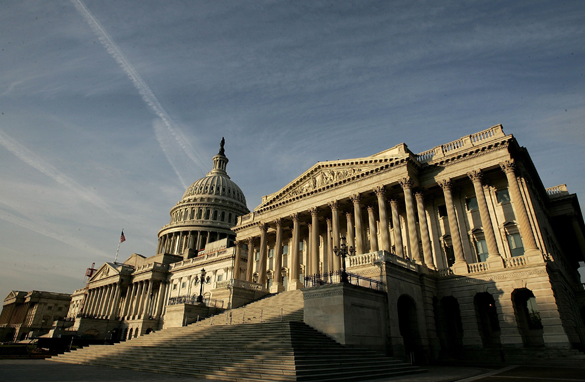 Our Congress should be ashamed of itself.

Despite getting nothing done about the issues troubling millions of Americans – like energy costs, high gasoline prices, offshore drilling – Congress is going to take a month-long vacation starting tomorrow.

In the Senate, Republicans have been blocking any other legislation until they get a vote on drilling. And since the Democrats' prospects seem pretty good for November, they don't want to cave in to the Republicans' demands to vote on drilling now, months before a new administration and Congress. To hell with what the public needs or wants…how can we turn the oil drilling issue into a political advantage for ourselves?

Iowa Republican Charles Grassley may have put it best when he called the Senate "constipated” and said it could use a good dose of laxatives.

If you're tempted to vote for an incumbent this fall, remember this: Congress plans to be out of town until after the political conventions end, returning to Washington September the 8th. If Nancy Pelosi and Harry Reid had any guts they'd cancel the vacation and keep Congress in session until some of these issues are resolved.

It's no surprise the American people are disgusted with the whole lot of them. A new CNN/Opinion Research Corporation poll puts Congress' approval rating at 22%. And that's high. Other polls have the rating as low as 9%.

This poll also shows 76% of Americans say things are going badly in our country. Only three times in the past have Americans been so discouraged about the state of our affairs: Watergate, the Iran hostage crisis and the economic downturn of 1992.

Here’s my question to you: In light of its many accomplishments, does Congress deserve a month-long vacation?

END_OF_DOCUMENT_TOKEN_TO_BE_REPLACED

Judge: Bush officials can be subpoenaed

There's a long history of the Bush administration simply ignoring subpoenas from Congress. Not that Congress has gone out of its way to exercise oversight of the executive branch. But when it does, President Bush just laughs out loud and ignores them, like unruly children who are acting up to get attention.

Well they got the attention of a federal judge. U.S. District Judge John Bates says the president's top advisers are not immune from congressional subpoenas. Bates says there's no legal basis for the administration's argument and that former legal counsel Harriet Miers must testify before Congress. However, Bates says Miers and others can assert executive privilege during their testimony.

Democrats call the ruling "very good news” and say that Miers, White House Chief of Staff Josh Bolten and Karl Rove must testify before Congress. Of course, the White House says it disagrees with the judge's ruling and will decide in the next day or two if it will appeal.

Karl Rove became the latest to raise his middle finger to the legislative arm of our government, when he defied a subpoena to testify earlier this month. The House Judiciary Committee voted yesterday to cite Rove for contempt of Congress. But this is only a recommendation; Nancy Pelosi will have to decide whether to bring it to a vote by the full House. And we all know how aggressive Pelosi has been when it comes to oversight of the Bush White House. With Madame Speaker, it's all about politics.

Here’s my question to you: What does it mean for President Bush when a federal judge rules his people are not immune from congressional subpoenas?

END_OF_DOCUMENT_TOKEN_TO_BE_REPLACED

Remember when John McCain talked about how he wasn't going to run a negative campaign? How he wanted to focus on the issues and not get down in the political mud? I guess you can chalk it up to something else McCain has changed his mind about. Now he's apparently decided that going negative is the way to the White House.

You don't need to look much farther than McCain's ads, which have become increasingly negative – calling Barack Obama a celebrity, and comparing him to Britney Spears and Paris Hilton. Or the ad that that says Obama "made time to go to the gym, but cancelled a visit with wounded troops." One study points out one-third of John McCain's ads refer to Obama negatively. On the other hand, 90% of Obama's ads don't even mention John McCain.

These negative ads feed the perception of McCain as an angry candidate. Even some Republicans don't think this strategy is such a good idea. Former top McCain strategist John Weaver called the celebrity ad "childish" and "tomfoolery”, while other Republicans have called it "unprofessional," "absurd and juvenile." An editorial in the St. Petersburg Times says of McCain: "The self-described 'happy warrior' from 2000 has turned sour... and the candor and straight talk that once made him such an attractive candidate are rapidly disappearing."

Meanwhile, McCain's flip-flop on the issue of offshore drilling has netted him some big bucks from the big oil companies. A non-partisan campaign finance watchdog group says that after McCain announced he was changing his position and now was going to support offshore drilling, the Big Oil companies opened their wallets. "Campaign Money Watch" found that in Texas alone, oil-related donors gave $1.2 million to McCain's Victory '08 fund in June – 73% of it coming after his reversal on offshore drilling. Think that's a coincidence?

Here’s my question to you: Is going negative against Barack Obama a winning strategy for John McCain?