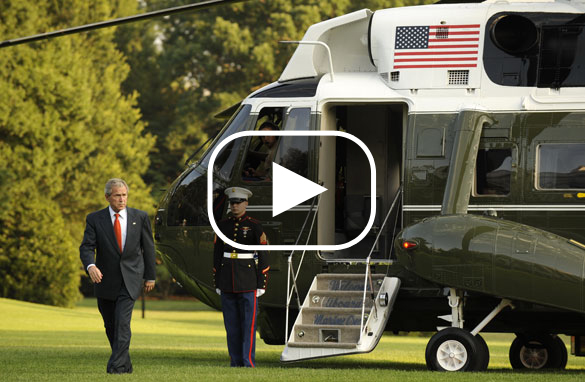 In case you're wondering why our economy is in the toilet, President Bush had the explanation at a closed Republican fund-raiser in Houston last week:

”Wall Street got drunk – it’s one of the reasons I asked you to turn off your TV cameras. It got drunk and now it’s got a hangover. The question is: how long will it sober up.”

The depth of the intellect at the very top of our nation's government is staggering, isn't it? Quite an assessment coming from a reformed alcoholic. The president had apparently requested that those attending the event turn off their cameras, but the comments were recorded and started popping up on Texas news outlets.

The White House grabbed their brooms and immediately began sweeping up after him. They say Mr. Bush was referring to the fact that, "the markets were using very complex financial instruments that had grown up over the years, and when confronted with the shock of this housing downturn, they did not fully understand what the consequences were going to be."

Problem is, that doesn't sound at all like the president saying "Wall Street got drunk." It's that kind of shallowness that has created an appetite in the American public and overseas for someone like Barack Obama.

King Abdullah of Jordan actually cut short his vacation this week so he could meet with Obama. It must be like someone who works in a nursery all week finally getting a chance to have a conversation with an adult.

Here’s my question to you: What do you make of President Bush's assessment that "Wall Street got drunk" when it comes to the ailing economy?

END_OF_DOCUMENT_TOKEN_TO_BE_REPLACED

Why do some Clinton supporters want to derail Obama?

PUMA is an acronym that stands for "Party Unity My A–." It's the rallying cry for a group of disenchanted Democrats – "PUMAs."

Many are supporters of Hillary Clinton who just can't quite get over the fact that she lost and Barack Obama won.

A humorless group, they accuse the party of rigging the primaries to favor Obama, saying that the DNC unfairly punished Michigan and Florida. Others say Obama isn't qualified enough to be the party's nominee or competent enough to lead the country. But he won, so a majority of Democrats obviously think he is.

Now Clinton called on her supporters to vote for Obama after losing the nomination in June. She is not supporting these PUMAs, and she says the stakes are so high that anyone who voted for her has more in common with Obama than John McCain.

But the PUMAs aren't listening. The head of the group estimates there are 250 PUMA-related web sites and 2.5 million supporters online. They are supposed to hold a conference next month in Washington to plan for the Democratic Convention in Denver in August.

They want Hillary Clinton's name placed in nomination so delegates get a chance to vote. In the "cut off your nose to spite your face" category, we find a bunch of these people who insist that if they aren't successful at the convention – they'll vote for McCain instead of Obama in November.

A recent poll showed more than 4 in 10 Democrats still prefer Clinton as the party's nominee. But, Obama leads McCain in general election polls. And it's likely that as Clinton continues to show her support for Obama, more of her backers will decide to vote for him.

Here’s my question to you: Why do some Hillary Clinton supporters want to derail Barack Obama’s nomination?

END_OF_DOCUMENT_TOKEN_TO_BE_REPLACED

Confident McCain can deal with Iraq?

John McCain has staked much of his campaign on the war in Iraq and the surge. He tells us every day how he was right about the surge – how the surge was the answer to all our problems in Iraq. Maybe not exactly.

Last night McCain proved his timeline about the surge is all wrong. In an interview on CBS, Katie Couric pointed out that Barack Obama says while the increase in troops helped security, a Sunni awakening and the Shiite government going after the militias before the surge were also major factors in reducing the violence.

McCain replied: "I don't know how you respond to something that is such a false depiction of what actually happened. Colonel McFarland was contacted by one of the major Sunni sheiks. Because of the surge we were able to go out and protect that sheik and others. And it began the Anbar awakening. I mean, that's just a matter of history."

Wrong again, Senator. The Sunni awakening in Anbar happened before President Bush ever announced the surge in January of 2007. In fact, the now-General Sean McFarland briefed the media in September 2006 about tribal leaders who were cooperating with Iraqi security forces against al Qaeda. Several news organizations reported on the Anbar Awakening taking place months before the surge.

Obama's campaign points out that McCain has his facts wrong. McCain's response is the Democrats are trying to minimize the role of our commanders and our troops. But if your campaign for president is built on your assertion that you are most qualified to be commander-in-chief, shouldn't you at least be able to accurately cite the recent history of the war you're asking the voters to put you in charge of?

Here’s my question to you: How much confidence do you have in John McCain's ability to deal with Iraq?