Did Gramm wait too long to resign from McCain campaign?

When politicians release information late on Friday afternoons, it's because they hope you won't see it over the weekend.

So it was late last Friday when John McCain's campaign co-chairman Phil Gramm quit. A former Texas Senator, Gramm called us a "nation of whiners" and said we are in a "mental recession." Gramm was also serving as an economic advisor to McCain.

McCain distanced himself from the remarks, but the damage was done. Democrats said it's another example of how out-of-touch John McCain is with the average American. McCain had already told us the economy isn't his strong suit. Phil Gramm's comments sort of proved it.

Gramm said he was quitting in order to "end this distraction” – saying it hurt McCain's ability to focus on the issues. What it hurt was John McCain's credibility when he claims to have the answers to our economic problems. Besides, Americans don't like being called whiners.

But that wasn't the only hand grenade from last Friday. That same day another McCain surrogate came out with an absolutely dumb remark of his own. Colonel Bud Day, who was a POW with McCain in Vietnam and is one of McCain's closest friends, defended the Iraq war policy by saying that "the Muslims have said either we kneel, or they're going to kill us." Republicans spent the rest of Friday trying to explain that Col. Day was talking about Islamic extremists, but that's not what he said. And it's a safe bet a lot of Muslims were not amused.

Here’s my question to you: Did Phil Gramm wait too long to resign as co-chairman of John McCain’s campaign?

END_OF_DOCUMENT_TOKEN_TO_BE_REPLACED 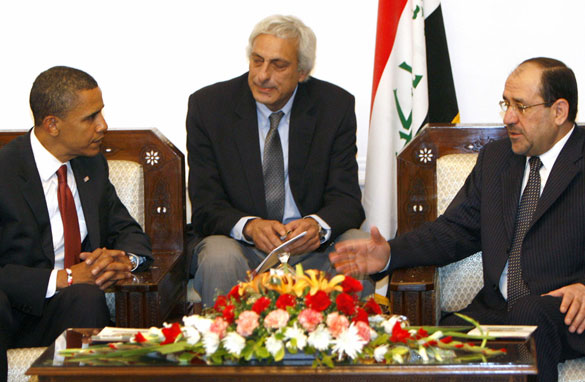 END_OF_DOCUMENT_TOKEN_TO_BE_REPLACED

Why do many Europeans overwhelmingly prefer Obama?

“The world is waiting to love America again.” That is a quote from a recent editorial in a British newspaper, and many Europeans are hoping Barack Obama will provide them with just that chance. When Obama travels to Europe later this week, it's expected he'll be treated like a rock star – mobbed by cheering fans in Berlin, Paris and London.

Books about Obama are hot sellers in France, and some European newspapers describe him as a "John Kennedy of our times." After eight years of unilateral "my way or the highway" George Bush, Europeans are hungry for the change Obama is offering, especially when it comes to America's role on the world stage.

It's been a long time since the visit by an American politician has been so highly anticipated in Europe. Some European supporters are mindful that too much swooning over Obama could actually hurt the candidate back here in the states. The Illinois senator could be seen as elitist among some working-class voters if he's perceived as being too chummy with the Europeans.

The other caution flag for Obama is his relative inexperience in foreign affairs, which might explain why Obama was careful to point out that this trip was going to mostly be spent listening rather than offering a lot of his own views.

Here’s my question to you: Why do polls indicate four European countries prefer Barack Obama to John McCain by a margin of 5 to1?