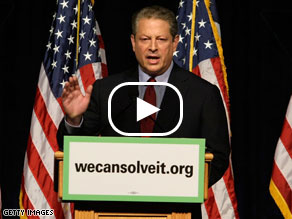 Kristina writes:
It's not impossible to become energy independent in ten years as long as everyone in Washington and the companies who profit from fossil fuels are on board with the idea. That, however, is impossible.

Ward from Gainesville, Fla. writes:
At least it’s a plan, probably 20 years too late – but it’s a plan. What’s yours?

Brian from Trinidad writes:
Gore's entire global warming, sky-is-falling cry and anything associated with it is the phoniest thing since they told me that I would go to hell if I ate meat on Fridays.

Escobar writes:
It's doable normally, but keep in mind this nation put a man on the moon before we put wheels on luggage. Eventually and gradually things will change, but not for the future. Things will change only when people hurt more in their pocketbooks.

Vinny from Connecticut writes:
Yeah, Al. Let's go back to the stone age, too! The older Gore gets, the weirder and crazier he becomes. Even if we did go "carbon free" in 10 years, what about the rest of the world, Al? Will they also listen to you, the Nobel Prize winner, expert and sage? Give me a break, Al!

Rick from Texas writes:
It is neither doable nor "ridiculous", but it is a goal worth establishing. Like in sports, the goal is to score every time you are on offense, but it doesn’t happen. This goal will not happen either, but we will be much better off if we try to reach it.

Dick writes:
The more Gore talks, the more convinced I am that the Supreme Court got it right.