Lifting the ban on offshore drilling?

Discoverer Deep Seas drillship off the coast of Louisiana drills for oil in the Gulf of Mexico for Chevron.(PHOTO CREDIT: AP PHOTO)

President Bush says Congress is the only thing standing between Americans and offshore drilling.

With gas averaging more than $4 a gallon, the president lifted an executive order yesterday that bans offshore drilling. But it was pretty much an empty gesture – not unlike a good deal of the rest of the Bush administration.

Offshore drilling has been against the law since 1981, and Congress would need to repeal that law before any drilling can take place. The president says Democrats should match his action to show that "they finally heard the frustrations of the American people."

Republicans in Congress are joining President Bush in laying the blame at the feet of the Democrats. Seven years without a coherent energy policy, and suddenly $4 gas is the Democrats' fault. Can you tell it's an election year?

The Democrats are pushing back. House Speaker Nancy Pelosi says expanding offshore drilling would do little to lower gas prices in the near future. She says President Bush should release oil from the Strategic Petroleum Reserve, a move he has resisted.

And it's not just Democrats who are against offshore drilling. California's Republican Governor Arnold Schwarzenegger says it's not the answer, and instead we should work toward alternative energy sources.

The whole debate is pretty silly when you think about it. The oil companies currently have 68 million acres under offshore lease that are not being developed. Also, the U.S. has a shortage of refinery capacity, so even if we started drilling for more oil, there would be an issue of where to refine it.

Here’s my question to you: Should Congress go along with President Bush's call to lift the ban on offshore drilling?

END_OF_DOCUMENT_TOKEN_TO_BE_REPLACED

Is Obama 'talking down' to blacks?

The man who could become the first black President of the United States is calling on blacks to take more responsibility for improving their own lives.

Speaking to the NAACP in Cincinnati, Obama got the most applause when he urged blacks to do more for themselves, saying:

"When we are taking care of our own stuff, then a lot of other folks are going to be interested in joining up and working with us and taking care of America's stuff… Teaching our daughters to never allow images on television to tell them what they are worth; teaching our sons to treat women with respect, and to realize responsibility does not end at conception; that what makes them a man is not the ability to have a child but to raise one.”

Obama said the problems that plague the black community aren't unique to them, but "we just have them a little worse."

Obama was criticized by Jesse Jackson for talking down to blacks. But Jackson is clearly in the minority – no pun intended. The largest study ever done of African-Americans – shows 84% of those surveyed say they think blacks need to be "more responsible for themselves as individuals." And other civil rights activists give Obama high marks for balancing his role as a black candidate with the need to speak to all races.

Here’s my question to you: Is Barack Obama "talking down" to blacks, as Jesse Jackson claims, when he tells them they must take more responsibility for themselves?

END_OF_DOCUMENT_TOKEN_TO_BE_REPLACED 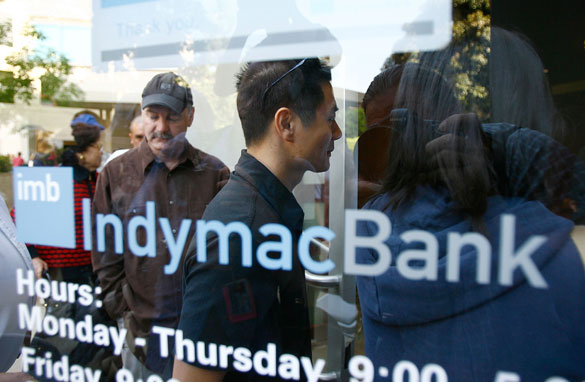 Customers line up in front of an IndyMac Bank branch in Santa Monica, California to withdraw their money. The bank failed and was taken over by the government last Friday.(PHOTO CREDIT: GETTY IMAGES)

The clouds over America's economy and financial system are growing darker and more ominous.

He warned that rising prices for energy and food are making the chances of inflation worse. And it's getting worse.

The Labor Department reported wholesale prices jumped 1.8% last month, which means inflation is now rising at a faster pace than at any time in the last 25 years.

Bernanke's testimony comes just two days after the federal government made provisions to assist Fannie Mae and Freddie Mac in the event they need it. These two companies hold or guarantee$ 5 trillion in mortgages, almost half of the nation's total. But as more and more people default on mortgages, the bigger the problems that are created for companies that hold them.

One of the nation's big bank's, IndyMac, failed and was taken over by the government last Friday. People in Southern California waited in long lines to withdraw their money, in scenes reminiscent of the Great Depression. Investment bank Bear Stearns went belly up in March and was taken over by JPMorgan Chase. More than 90 banks are currently on the FDIC watch list.

There's more: Corporate profits are slowing, the stock market is tanking, energy prices continue to surge and the dollar hit a record low against the euro today. But this morning President Bush assured us our financial system is quote, "basically sound."

Here’s my question to you: How concerned are you about the health of America's financial system?