Marines patrol in the town of Garmser in Helmand Province of Afghanistan. (PHOTO CREDIT: AP PHOTO)

President Bush is thinking about speeding up the withdrawal of U.S. troops from Iraq starting in September.

Reports say no decision has been made yet, but anywhere from 1 to 3 of the 15 combat brigades now in Iraq could be withdrawn by the time Mr. Bush leaves office in January. That would leave between 120,000 and 130,000 troops in Iraq, down from a peak of 170,000 last year.

One reason for an accelerated withdrawal is because more U.S. troops are needed in Afghanistan, where the Taliban have been making a comeback. Yesterday, 9 U.S. troops died in an insurgent attack there – the deadliest for U.S. troops in 3 years. In the last two months, more American and allied troops have died in Afghanistan than in Iraq.

The White House says that although the president hopes to bring more troops home, he will wait to hear what General David Petraeus says in September. If President Bush decides to announce troop reductions, it could impact the presidential race. John McCain could say that the surge, which he was in favor of, worked, and therefore troops can now be withdrawn.

On the other hand, Barack Obama has been against the Iraq war from the outset and has said he would immediately look at getting our troops out of Iraq if he's elected. Obama has said the war in Afghanistan has suffered because of the administration's misguided policies in Iraq. He says he would be in favor of deploying up to 10,000 more troops to Afghanistan.

Here’s my question to you: Would faster troop withdrawal from Iraq help John McCain or Barack Obama?

END_OF_DOCUMENT_TOKEN_TO_BE_REPLACED

Former President Bill Clinton has a warning for all of us: he says this country is becoming more and more divided.

Speaking to the National Governors Association, Clinton said that even though the Democratic primary produced historic results with the final candidates being a woman, his wife, and an African-American man, he still sees a larger problem.

Clinton believes Americans are becoming more polarized as a nation. He says we're growing farther apart from each other and are "hunkering down in communities of like-mindedness, and it affects our ability to manage difference." Clinton says Americans are separating themselves by choosing to live with people they agree with.

President Clinton also reminded the governors that the issues they're dealing with today are similar to those faced by Teddy Roosevelt a century ago, including inequality among the rich and poor, immigration and energy. But Clinton says he thinks we will deal with these issues and enter a period of light, not darkness.

Here’s my question to you: Do you agree with President Clinton that America is becoming more divided?

END_OF_DOCUMENT_TOKEN_TO_BE_REPLACED 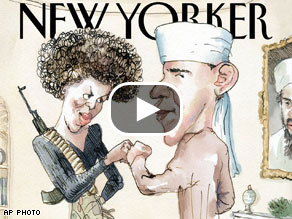 The New Yorker magazine says it's satire. A lot of people think it's disgusting.

This week's cover portrays the Obamas as terrorists. Barack Obama is in the Oval Office dressed in traditional Muslim attire - sandals, robe and a turban. His wife Michelle appears with an Afro, dressed in camouflage, combat boots and carrying an assault rifle.

The couple is doing a fist bump, while an American flag is seen burning in the fire place and a picture of Osama bin Laden hangs on the wall.

Obama's campaign calls the cover illustration – which is titled "The Politics of Fear" – "tasteless and offensive”. John McCain's campaign agrees.

But the magazine calls it satire, saying the cover "combines a number of fantastical images about the Obamas and shows them for the obvious distortions they are." They add that satire is part of what they do and the cover is meant to bring things out into the open.

Some agree with the magazine, saying that it just pokes fun at all of the ignorance out there and generates discussion.

But the Huffington Post suggests this is the perfect image for anyone who's ever tried to paint Obama as a Muslim, his wife as an angry revolutionary or questioned their patriotism.

Here’s my question to you: What do you think of the cover of the New Yorker that shows Barack Obama in traditional Muslim attire and his wife Michelle with an Afro and assault rifle?