How should McCain deal with Pres. Bush’s negative numbers? 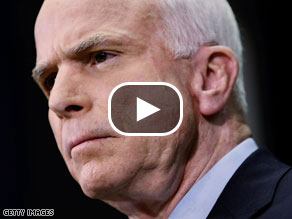 Many Americans are worried that a John McCain presidency would be just like another term of George Bush.

Two thirds of Americans are concerned that McCain would pursue policies too similar to President Bush according to a new USA Today/Gallup poll. 49 percent say they are "very concerned."

This creates a real dilemma for McCain. The conservative Republican base is less than thrilled with McCain as the GOP nominee. And that's where the few remaining people who think President Bush is doing a good job reside.

McCain can't separate himself too much from Mr. Bush or conservative Republicans will tell him to take a hike. But if he doesn't separate from Bush, he's going to have trouble attracting those voters who think President Bush is the worst thing to happen to this country in a good long while. And there are lots of those.

A new Wall Street Journal-NBC News poll focuses on President Bush's disapproval rating and the unprecedented role it could play in the campaign. None of this is good news for McCain. The survey puts the president's disapproval rating at 67% among older voters, 71% among women and a whopping 75% among independents.

These are all groups McCain desperately needs to have any kind of a chance. One Republican pollster points out that in order for McCain to be elected president, at least one-third of McCain's votes will have to come from people who disapprove of the job President Bush is doing – most of them independents.

Here’s my question to you: How should John McCain handle the problem caused by President Bush’s huge negative numbers?

Ally from Toronto writes:
McCain should throw Bush under the bus while winking at the conservative base. The conservative base has to understand that McCain must exhaust all options in order to secure a win, just as Bush did in the 2000 primaries.

Luke writes:
He should just stop fighting it; he will never convince anyone that he is not totally in-line with George Bush. He should just go ahead get it over with and pick Cheney as his V.P. Nobody is buying the straight talk act any longer.

Paul from Muncie, Indiana writes:
His only hope is to wait for the Democrats to screw up the election. They always do.

Anthony writes:
McCain should embrace Bush's negative numbers as his own. He should continue to support the president’s policies because this will help seal his own pathetic fate in November. He should think about his health and his age, call it a day and retire with some dignity instead of with none as a loser with Bush in November.

Lene writes:
My guess is he is going to flip-flop on the issues according to whom he is addressing at any given time. If he is trying to appeal to Democrats, he will say bad things about Bush. If they are Republicans, he will put Bush in a good light.

Kenny writes:
By running a campaign abroad he may find some small country that will allow him to practice being their president and then maybe in 24 years he will be ready to try again. Maybe by then people will have forgotten Bush.

JW from Georgia writes:
In the world of poker, Bush is a pair of deuces in a game where McCain must have a full house to even call the current bet. My guess is, McCain will have to bluff.